Another KGN AAR- A Rots Scenario

We had a great game today down at the Church Hall- heaps more room than at my place. We introduced our friend David to Kampfgruppe Normandy, and he had a great time- and not just because he won.
I based it loosely on the Commandos at Rots scenario in Kampfgruppe Normandy. We didn't have all the things on the list in the book, but managed to substitute an approximation- plus we added in some artillery for a bit of extra firepower.
In the end the British won, despite losing two Shermans and having a whole section wiped out by an artillery stonk.
We got to use the British Commandos for the first time, well my first comlete section anyway; David handled them well & managed to storm the village Church, driving out a German force- well done Commandos.
The Germans had some unfortunate dice rolls and often lacked enough activations to really get momentum. Even their Tiger tank failed to take out a Churchill tank when it had the chance to shoot it in the flank. Amazingly a Sherman managed to take down a Panther, and another Sherman sent a German squad packing with its bow & co-axial MGs.
The cows are used for objective markers- the majority of which were captured & held by the British.

I hope you enjoy some pictures from our game: 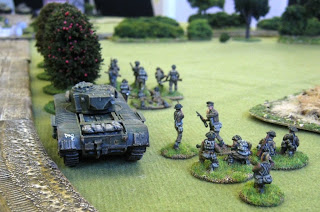 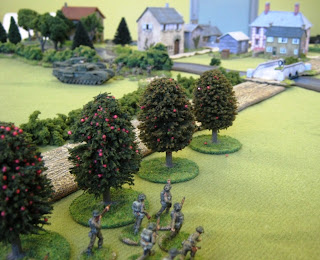 Your comments & questions are welcome.
Posted by Jacksarge Painting at Saturday, July 28, 2012 12 comments:

I have finished my first batch of 20mm - 1/72 British Commandos for 1944/45.
This first lot include metal and plastic figures. Most of the plastic figures are conversions, basically head swaps, weapon swaps & one with a different arm. 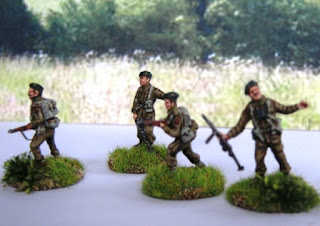 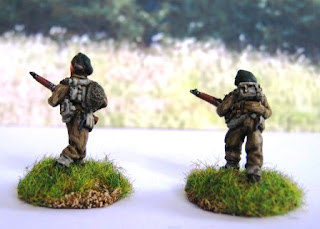 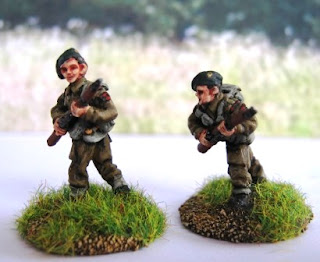 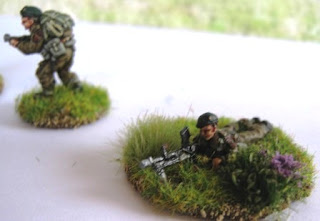 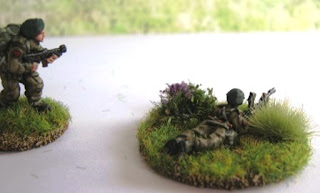 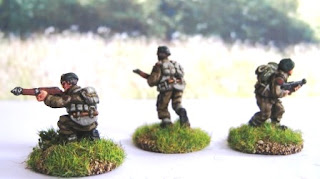 I have some more Battlefield/Blitz figures yet to paint, plus Dan Dunbar is making me a section of commandos, plus I may lash out and buy the AB Commando section, and finally, I may do some more headswap conversions.
Posted by Jacksarge Painting at Saturday, July 14, 2012 16 comments:

I have a review for you of excellent new products from Blitzkrieg Miniatures in the UK. I came across them from a thread on TMP which was promoting their product, I had never seen their stuff before & could not find a review of it either. Anyway, I thought I'd take a risk and ordered their Mk IV Churchill & a Staghound Armoured Car. I struck up a bit of an email conversation with Paul from Blitzkrieg & told him that I would be doing a review of his product on my blog, well lo & behold he has also sent me a Tiger tank to review free of charge (cheers Paul!).
I received the product in about a week from the UK, which is pretty quick turnaround compared to other stuff I've ordered from the UK. The AFVs were very well packed and sustained no apparent damage from their journey. I shall use a series of photos of the product to help illustrate the review, including some comparative shots. 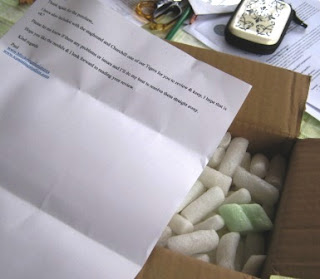 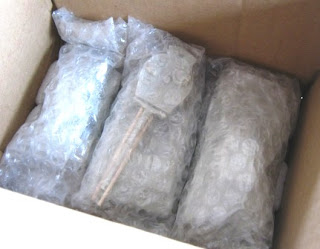 These two shots above give you an idea of the decent job of packaging done by Blitzkrieg Miniatures. 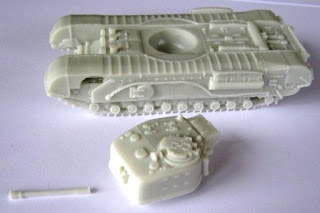 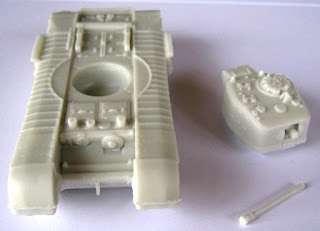 Two shots of the Churchill straight out of the bubble wrap. As you can see the whole thing is only three parts, no super gluing of metal track sections here. 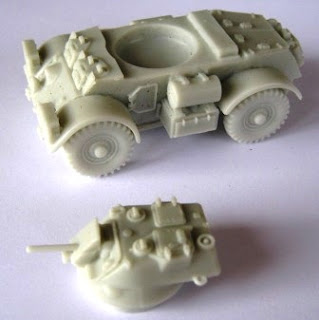 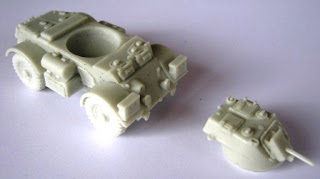 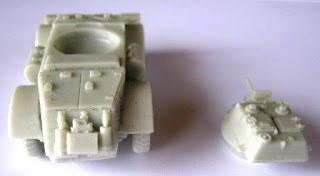 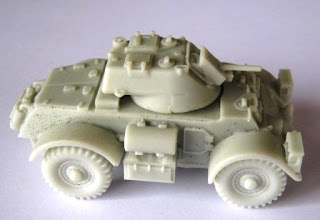 Above is the superb Staghound A/C- it is under their US listing, but could just as easily be under the British list. The little black spots are not flaws, just a bit of dust on the casting. 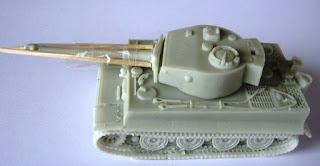 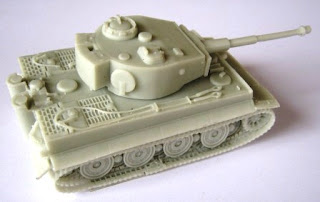 The mighty Tiger tank, with added protection to the gun barrel. 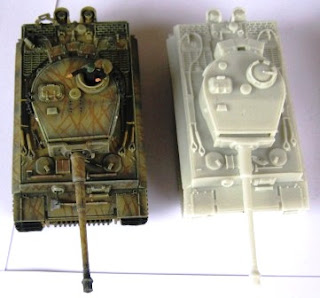 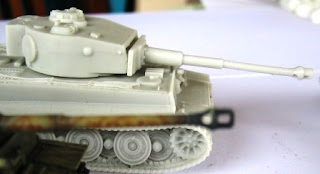 I am not a rivet counter by any means, and this was the only fault I could find with the AFVs- the Tiger's gun barrel should have those vents on the muzzle twisted around a bit more, like the Dragon version- hopefully this will be easily resolved with some careful cutting and super gluing. 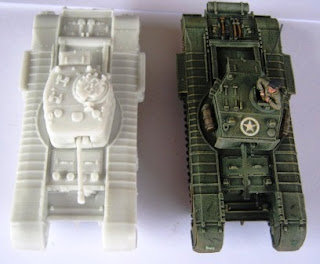 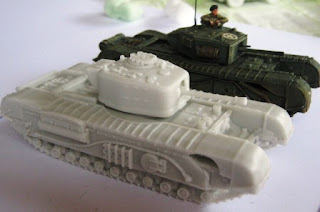 The only other Churchills I have are the Italeri 1/72 versions, & the Blitzkrieg Churchill seems to fit in really well. 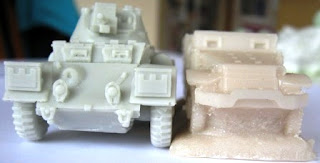 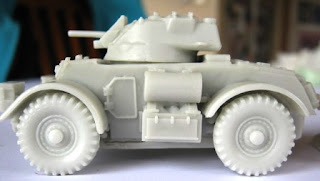 Before you start shouting at your screen, yes I know that the Ready to Roll halftrack is not a Staghound- I don't have another one. The idea of these pics is to give you an indication of the excellent quality of the casting of the Blitzkrieg models. Notice particularly that there are no solid lumps of resin under the vehicles, & and for those who prefer their vehicles unbased you don't have to worry about grinding off unwanted resin.
My verdict is that these are superb castings with a superior form of resin which appears to be less brittle & showed no glaring examples of bubbles or chipping. They are very well detailed, extremely easy to assemble, and should be great fun to paint. If you want to get your tanks onto the battlefield in quick order then this is one of the best options out there at the moment. They are priced at 9.99 (Pounds Sterling) per vehicle or if you buy three of a kind, only 25 quid. At the moment they have a deal running that if you buy any 3 you will get a 4th for free- wishing I'd done this now, but I didn't know what they would be like.
Apart from the little issue with the Tiger's barrel, my only wish was that the option for open hatches was available so I could put my own tank commanders in. Paul assures me that they are planning to do this in the future & may be making some of their own figures to go with them. Keep checking their site for new releases as Paul has indicated that they are working on many other vehicles in 1/72.

I hope you have found this useful. Do yourself a favour and order some, I don't think you'll be disappointed.