Back again with another post; I tend to wait until I have finished something before I post, and that can take me a while....

In this post I have an assortment of British in plastic, including some conversions.

Why should I bother to convert cheap plastic figures when so many alternatives are available? I enjoy the process and the opportunity to create some unique figures.

In this post are some British which have been converted using figures from the old Airfix British 8th Army set combined with the Italeri British commando set. I liked the idea of having blokes with their sleeves rolled up, and had no use for the commando’s with their knitted “beanies”, so I combined torsos, legs and heads from the two sets. I was especially happy with how the two combat engineers came out. Tools for the job were a sharp blade, a small drill bit, tweezers, fine wire for pinning, “Zap” Gel Glue and Tamiya White Putty for filling any gaps.

I have also included my first three finished Airfix WW2 British from their new set- the rest are on the work bench in various stages of completion. I don’t mind these figures too much, although some of them are rather “spindly”. One of the figures I am only using for chopping bits off- a really skinny bloke with an early war style gas mask thing on his chest, but his head is useful. I’m not too keen on the bloke dragging himself along with a PIAT & am working on another conversion for that one. As usual there are too many stens in the set, and the rifles can look a bit dodgy, but I found the radio operator and the crouching bren gunner to be excellent little figures. I have since purchased a box of the Caesar WW2 British which I think will mix in quite well with the new Airfix, plus I bought the new HaT British Tank Riders set- which look very useful.

That brings me to six different manufacturers in plastic for the British figures and three different makes in metal- makes for an interesting mix.

I have taken some photos of other finished stuff, but will save those for a later post I think. 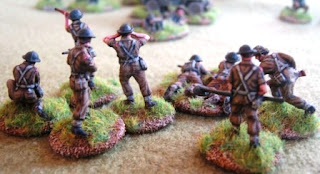 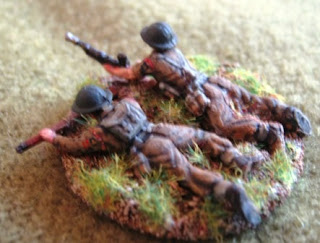 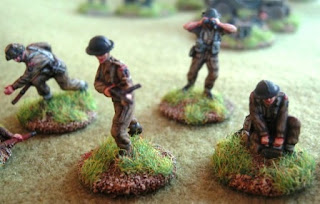 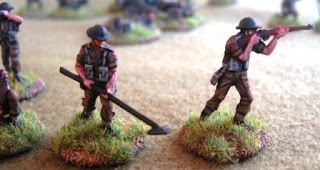 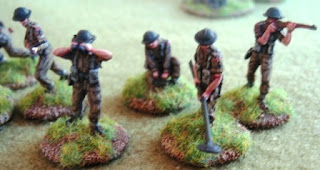 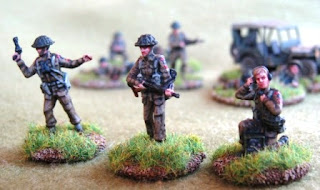 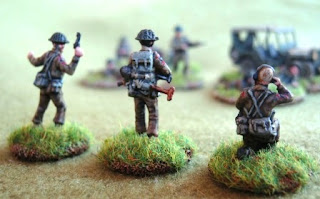 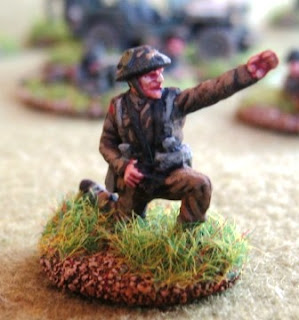 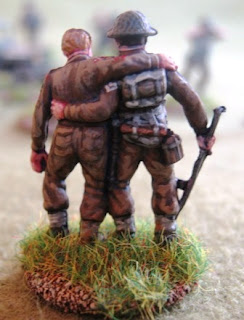