This is my second painted/based review of 1/72 plastic WW2 British infantry. Last post we had the new Airfix British set, this week it's the Caesar British.
This set has been reviewed in its bare plastic form on Plastic Soldier Review here. I will not attempt to duplicate the information found on this excellent site, rather I want to give you an idea of what they look like "Painted Up".
My personal opinion is that this is an excellent set with loads of crisp, fine detail and decent human proportions. They also size up well against Airfix, Plastic Soldier Company and AB.
My only beef would be that there are four blokes with flamethrowers, which seems about three too many IMO. Bit puzzled why they went for the "bobble" on the officers beret, but that was easily dealt with by a blade.
They were great fun to paint, but I probably took a bit longer with them than I normally would owing to the fine creases and extra detail.
So if you are starting a British force this would be a great box to start with, along with the PSC set to give a pretty good selection for your basic infantry platoons- apart from a 2 inch mortar (that's what they could have done instead of the extra flamethrowers).
Here are the pictures. Please note that the officer was already mounted in the White Scout Car when I took my photos, so I have cropped the Scout Car images. The figure next to the bren gunner is not from Caesar, but a slightly converted Italeri figure. 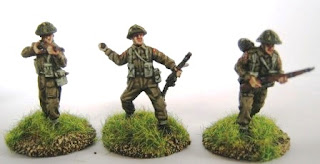 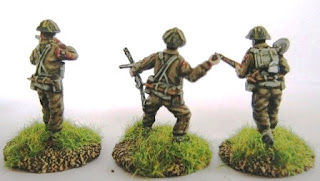 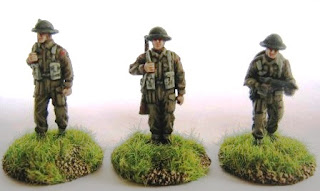 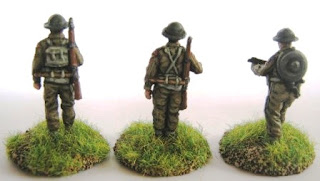 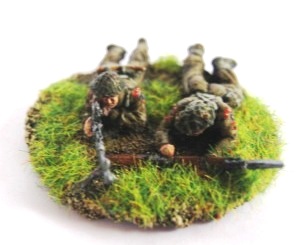 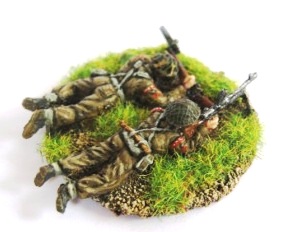 I know quite a few blokes have done reviews of the recent Airfix WW2 British Infantry set, but this is a "painted up" version- not intended to replicate what has already been done on PSR.
Firstly, I don't think this is the best set Airfix have ever done, however I do think it is a useful set for those collecting a 20mm British force for NW Europe. The figures are a little on the undernourished side but have some quite nice detail. Some of the figures I would not use as they are because the poses are a bit out of place, for example:

This picture comes from Plastic Soldier Review, who recently reviewed this set. This chap has very spindly legs and carries a gas mask, which I understood to be a piece of equipment issued to the BEF and early war troops. I decided I couldn't rescue this pose, so I lopped the heads off to use on other figures.
I also made changes to these poses:

I cut off the carrying handle on the Bren gun, just because I didn't like the look of it (yes, I know they had them), and PSR called it "grossly exaggerated". The bloke in the middle appears to be carrying the rolls of white tape used for marking off mine fields or where mines were on the verges of roads, (although PSR suggest it is for field telephone cable, could be)- an interesting choice of pose but not one I would want several of in a box, so I cut off the tape roll: 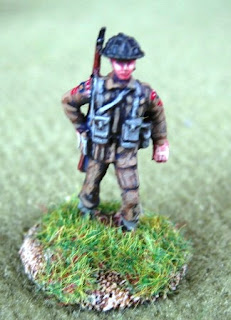 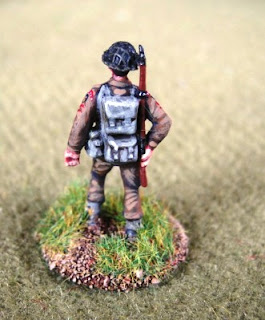 The bloke with the PIAT, although interesting, didn't seem right. The PIAT looks too spindly and the likelihood of him firing it one handed would be pretty slim. I converted this figure by cutting off the PIAT arm and replacing it with a sten. This figure was then put with a slightly converted Revell 2inch mortar figure- I gave him an Airfix head from one of those figures I mentioned earlier: 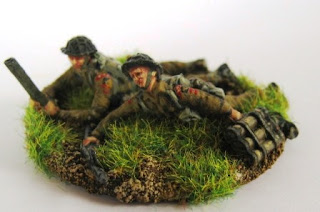 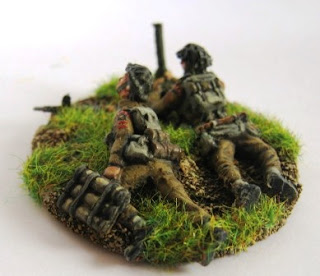 I think I've taken those too close up.

Here are some of the painted up figures from an earlier photo session; I think they came up quite well in the end: 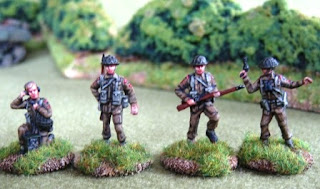 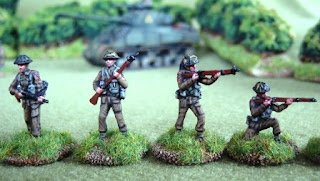 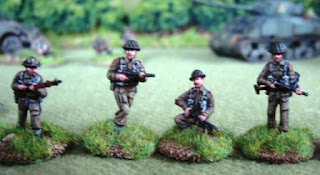 This next lot of photos are from the most recent photo session: 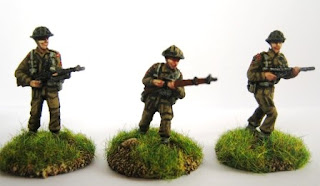 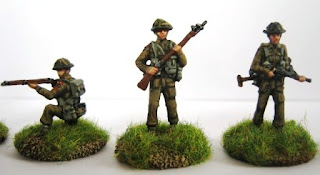 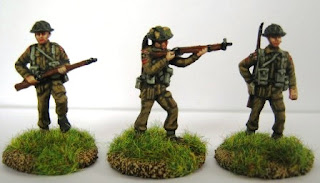 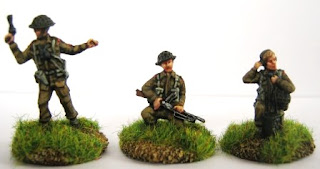 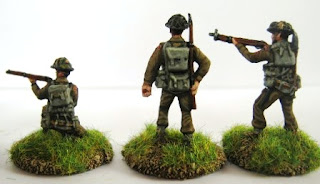 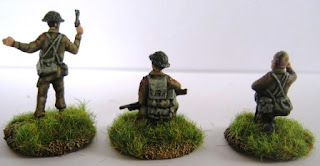 I think PSR has made some pretty valid comments about this set, but until they are actually painted up one cannot fully appreciate them. With some alterations I have been happy to include them with my British forces for the Dorsets from 43rd Wessex Division. Another bonus was the low cost of this set, as Airfix stuff seems to be cheaper here in Australia than even the UK- same can't be said for most of the other manufacturers though.

I hope you blokes have found this painted review useful, stay tuned for a painted review of the excellent Caesar Miniatures WW2 British infantry set in a future post.

G'day, my mate the Rajah & I had another Kampfgruppe Normandy game last Sunday, and this time we got the line of sight stuff correct, we did however take a while to figure out the niceties of artillery stonks.
The Rajah placed the terrain while I worked out the approximate points & morale values of the forces. The terrain he placed appears below:


We diced for which end we would deploy from and placed two objective markers each- mostly near the bridge area (have to be 12" apart though). I think I wound up with the better end, but war is not usually equally balanced or fair- the German infantry had much further to travel on foot (still waiting for full compliment of halftracks). The Germans did however have a much greater Recce force & some useful armour. The game was an escalation one, with more stuff coming on each turn. We both had some off table artillery we could call on, plus I had made sure I had a FO and a registered target point on the German end of the bridge.
The Rajah quickly took positions by the river with his recce units which included a schwimwagen, a halftrack & a Puma. He followed this up quickly with his Stug III & a captured Sherman (boo hiss). the Stug went straight up the road and onto my RTP, however the British stonk only managed to supress it.

The Stug shrugged of its supression (& took a morale chit), and proceeded to trundle over the bridge and towards the oncoming Churchill. The Churchill had already managed to shrug off one potshot from the Stug, and the British infantry had ducked behind a nearby building, but....
"Leg it lads" shouts Nobby Clarke the tanks commander, "the old girl's bought a packet!"
First kill for the Stug which sat blocking the end of the bridge. I attempted to have at him with my Achilles from around the backs of the houses, and brought up my 17 pdr, the Achilles failed to take down the Stug, exposing the Achilles to potential doom, but....
My PIAT team had had cunningly positioned itself behind the hedge outside the church and struck a blow for Dorset against the Stug's more vulnerable side armour- "Well done my brave lads!".
Unfortunately the bridge was now blocked by the burning hulk of the Stug, and neither of us had a bulldozer. Infantry could still get accross but I wasn't too keen on moving into a hail of lead from Rajah's MGs which were preparing to set up. Fortunately for me I had a couple of excellent observation points from a hillock and the church belltower and began to radio in for some devastating stonks from my off table battery of three 25 Pdrs.
It was some well aimed stonks which did for the Jerries on this occassion, losing a couple of recce units in quick succession, followed by their HQ in a heavy car, which precipitated a quick withdrawl.

We had great fun, learnt some more about the game, and are looking forward to our next encounter.

G'day fellow wargamers & military modellers, this weekend I'm posting my completed model of the White Scout car. This is an Italeri 1/72 model which I picked up at a local model shop (probably paid too much for it, but if I buy their stock they might get some more models in :)). I haven't built a model with this many parts since I was a teenager, so I was a bit rusty & maybe some parts weren't quite in the right alignment, but I was happy with the end results.
The crew is of mixed manufacture with a Kelly's Heroes driver, a Caesar Miniatures officer pointing, an AB Miniatures officer lounging and a HaT British tank rider chap seated.
The decals are for 130th Brigade of 43rd Wessex Division, and made by Doms Decals- intended for 15mm stuff but seem to work fine at this scale.
The weathering is a combination of paint and Vallejo & MiG pigments- a mixture of colours. This is the first of my own models which I have applied a decent amount of pigments to, and I am quite pleased with how it turned out. I haven't sprayed it with dullcoat yet, I'm a bit unsure what this will do to the pigments.
The idea is to use this as a British command vehicle for Kampfgruppe Normandy. 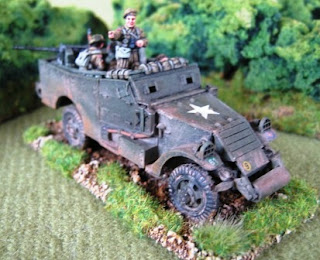 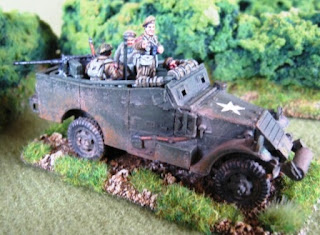 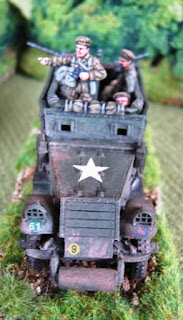 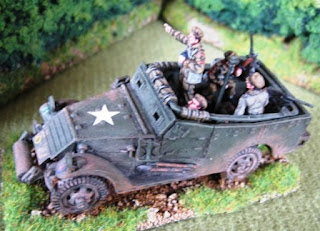 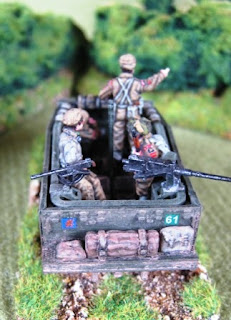 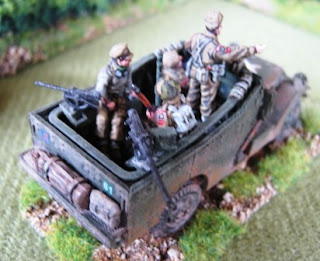 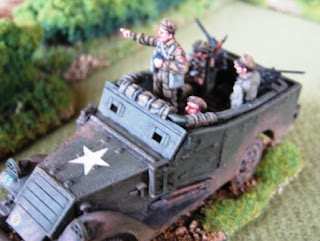 I'd like to be able to take better photographs, as the models often look better in "the flesh" than what I can photograph- anyone got tips for taking better pictures?- bear in mind I have a pretty basic digital camera.
Cheers,
Jacksarge.
Posted by Jacksarge Painting at Saturday, April 07, 2012 9 comments: