I really like these sculpts, 28mm Wargames Foundry again. To me they look like classic German command types ala Airfix & Commando War Comics, lots of fun to paint. I have tried to vary the tones of Field Grey and other greys where I could. These were part of what I'm calling the "Operation Sealion" commission that I just finished - which includes the Fallschirmjagers in my last post. 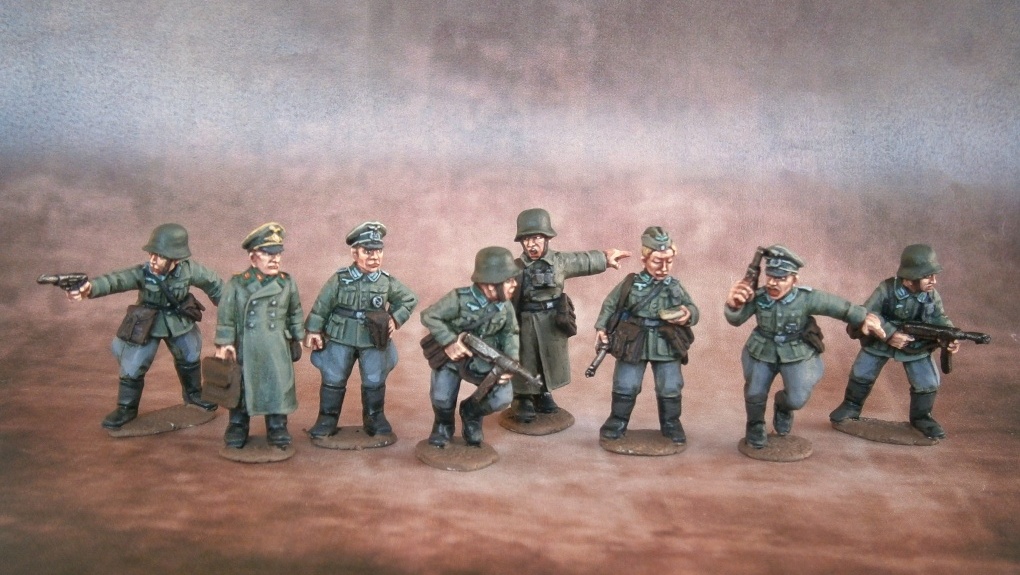 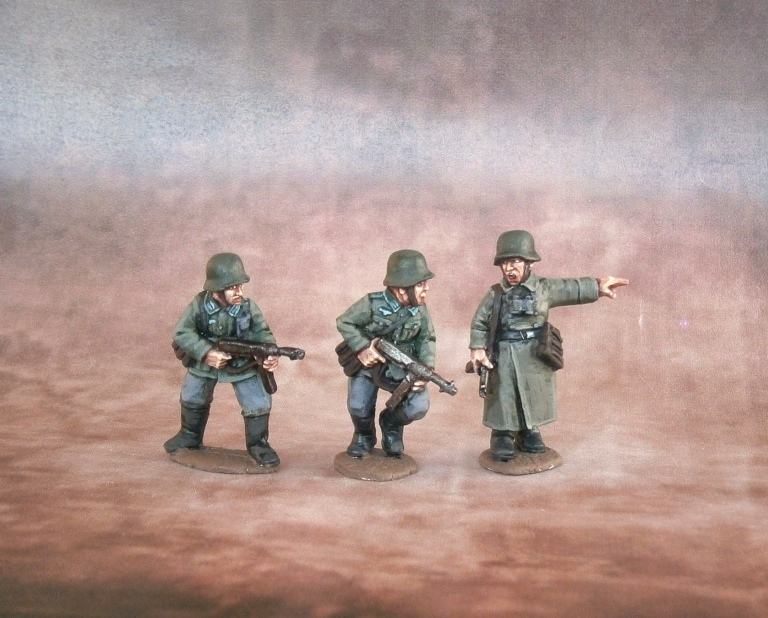 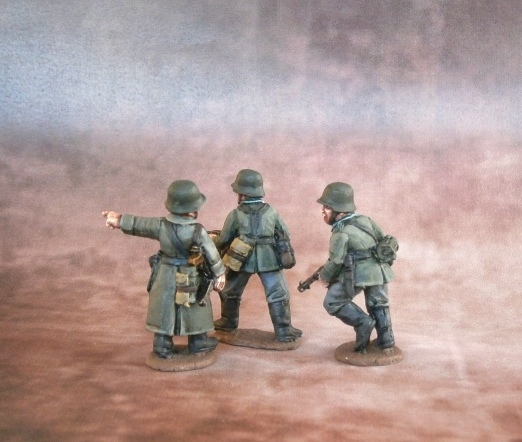 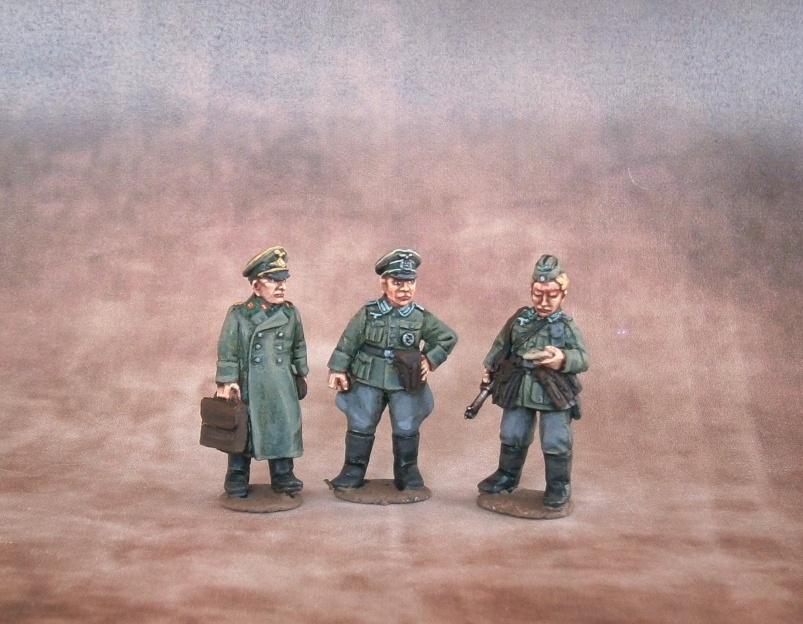 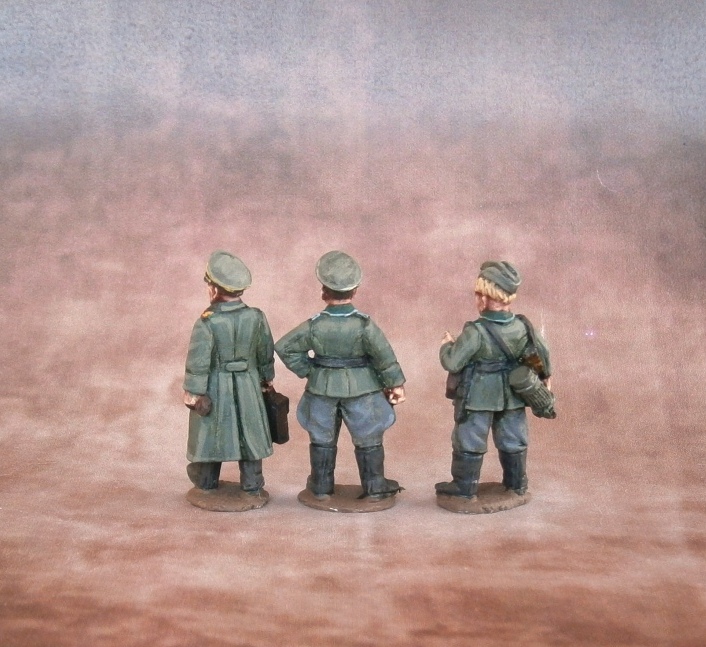 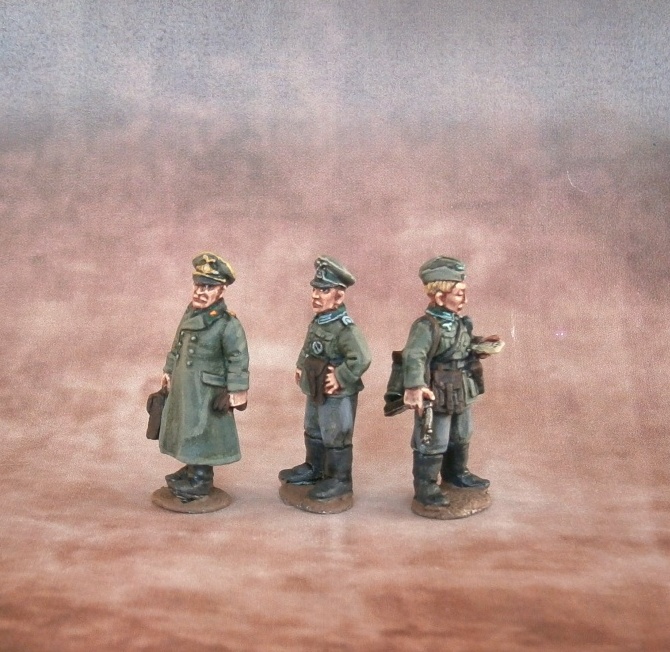 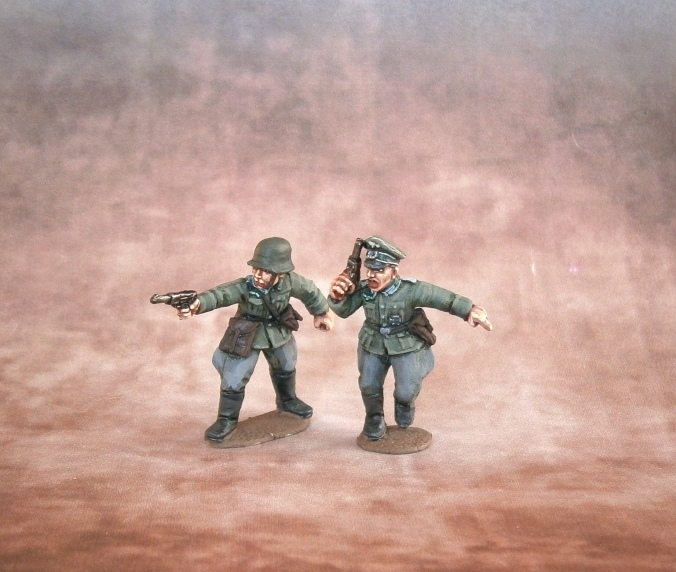 Here's some pictures from a commission I have been working on recently. They are 28mm Wargames Foundry Fallschirmjager, which can be found HERE . The pictures in today's post are several sets of WW2022 from this range. Hopefully I will be able to feature some of the other sets over the next few days. 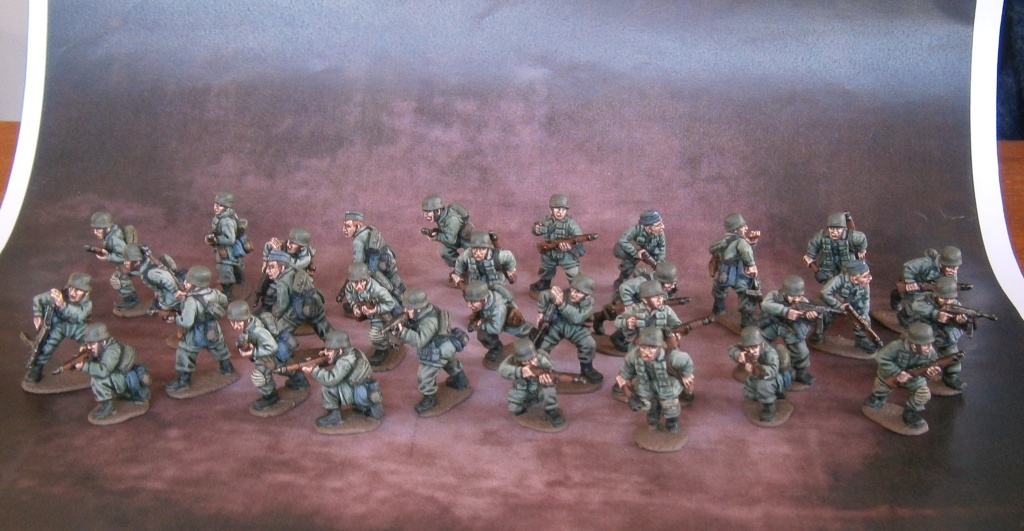 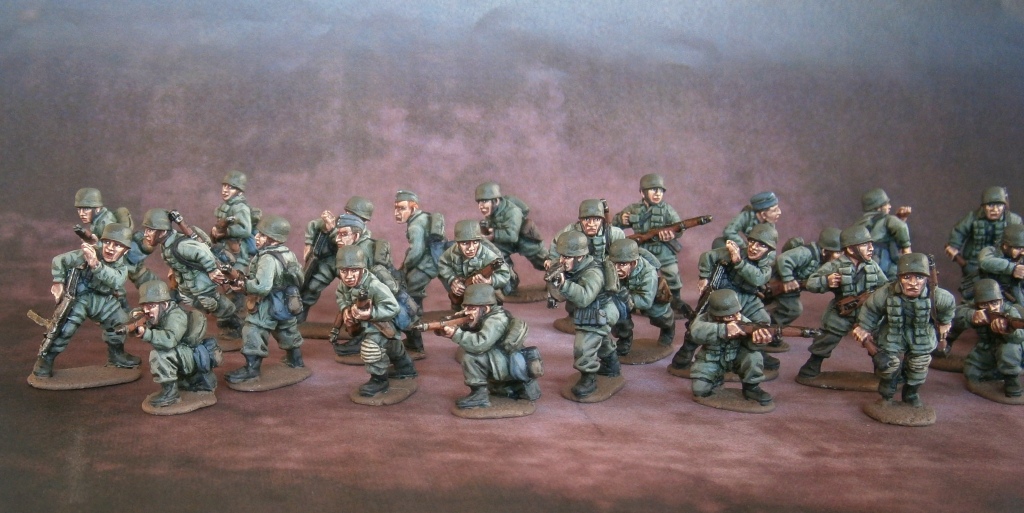 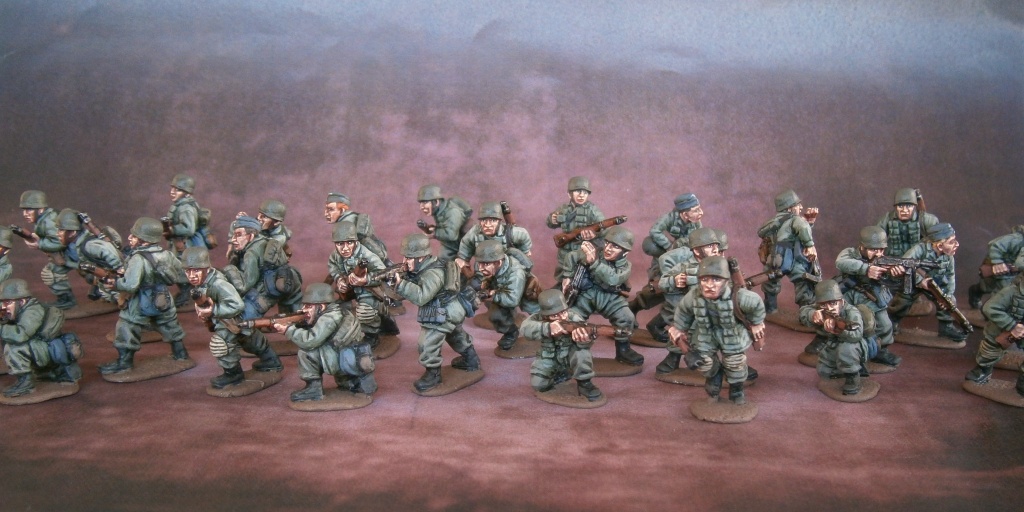 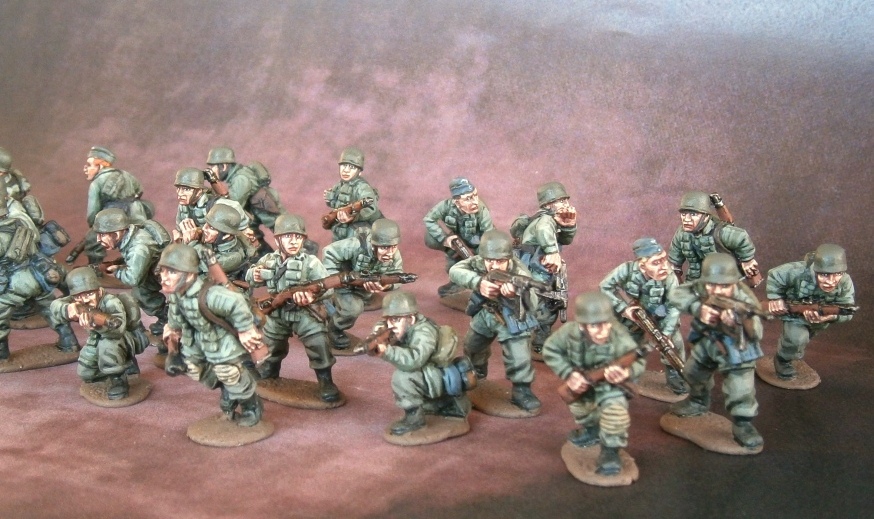 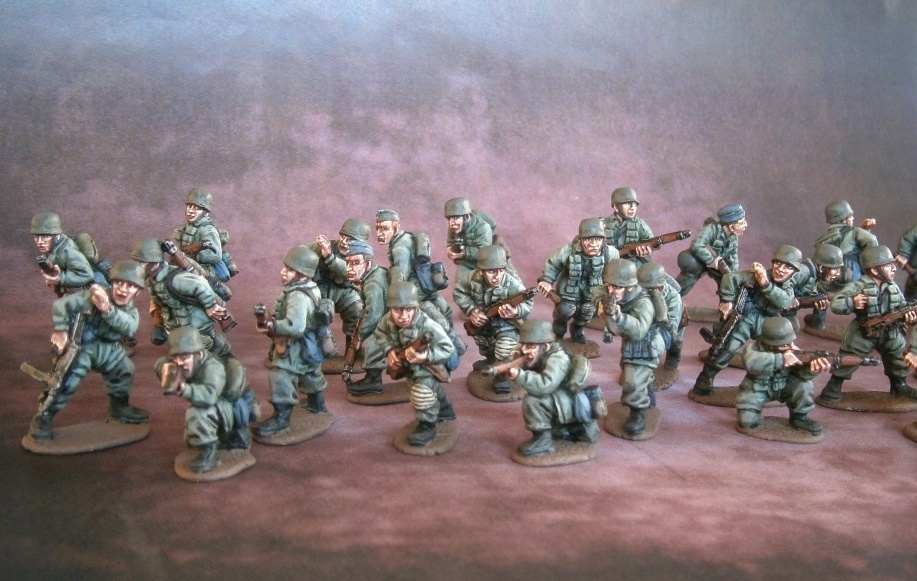 These days it's not very often I post pictures of stuff that is for my own collection, but today I'm going to - so there! :-)
For some reason I've been a bit reticent to post pictures of my 28mm Anglo-Saxon collection, I think I wanted to wait until I had some fancy terrain or something to pose them with or something. Anyway, these pictures are taken straight from the painting desk and represent a couple of figures I finished recently.
Just reviewing the personal hobby goals I recorded at the beginning of this year, it seems I am well underway to achieving them. Here's some of what I wrote on the 5th of January blog post:


For myself, I am keen to get hold of some terrain, buildings, civilians & animals to use in my Dark Age games. I have been eyeing off the resin buildings from Gripping Beast (they seem excellent value), as well as their ranges of civilians & livestock. I notice Warbases in the UK has some rather useful animals which would work too. Blacktree Designs also have some useful civilians.

Well, I can tick a bunch of that stuff already - doesn't mean I've painted it all yet though :-)
I have two scratch-built dark age houses now, plus the resin Gripping Beast church building (unpainted as yet). I have a pack of Renedra wattle hurdle fencing to base & paint too. On the livestock side of things I have acquired sheep, pigs & highland cattle (Gripping Beast), plus a cool blister with chickens & a crafty fox (can't recall manufacturer)  - I have painted & based the sheep so far. Civilians? loads of 'em now :-) I picked up packs from Gripping Beast & Blacktree Designs (in one of their many sales). I have painted several of the civilians including some monks. The other day I picked up a nifty Roman ruin from a local pet shop - very appropriate for England in this era, I'll probably add some ivy to it. I still have quite a few Gripping Beast warriors to paint up yet (all metals), these include more archers & some slingers, plus I recently received 16 excellent figures from Saxon Miniatures - very nice figures indeed.
Rambling done, here's the pictures - (banner & shield decal from Little Big Men Studios): 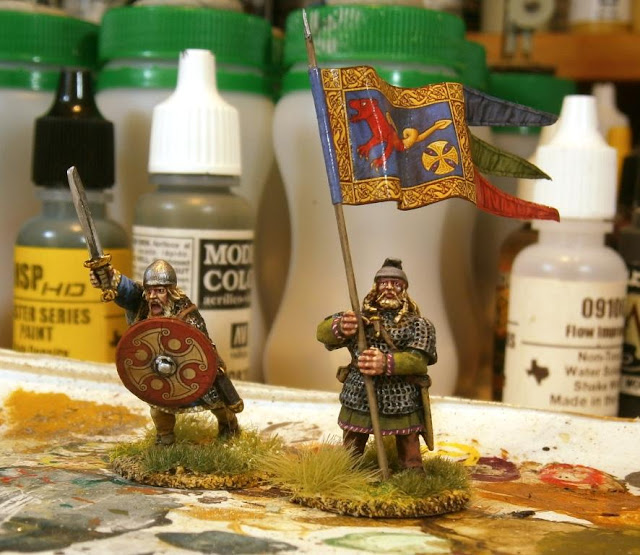 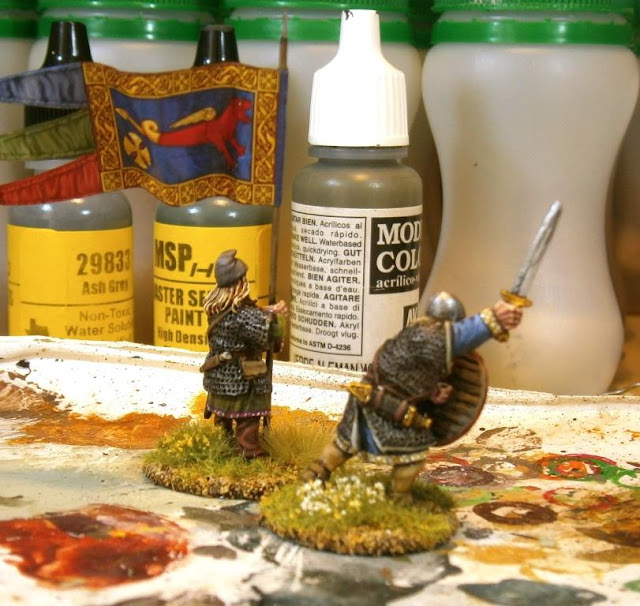 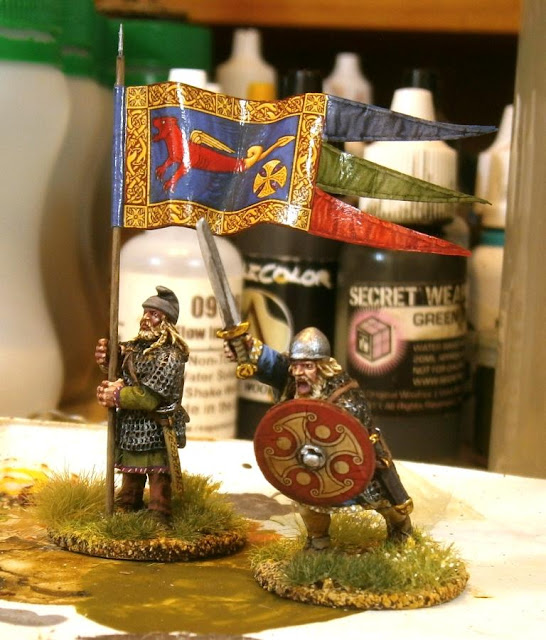 All the very best,

Sneaking in some more Home Guard...

The current commission I'm doing is mostly Foundry Fallschirmjagers & other Germans, but my customer also slipped in some extra Home Guard figures to bring his force up to full strength. That last bunch of Dad's Army figures I did was for his collection, so I've had plenty of practice with these excellent Foundry figures :-)
Here they are on the workbench, all painted & on bases:

Here's what I'm working on today:

These are splendid Foundry sculpts of German officers & some underlings.


With regards to the plastic 1/72 figures I'm giving away, the WW2 stuff is all gone but there's still  bags full of Colonials & 7YW Prussians. I'll even throw in some painted & based Colonials - but be quick & send me an email at jacksarge777 at gmail dot com  - or someone else will get in before you :-)

More Boys in Horizon Blue...plus some stuff to give away. 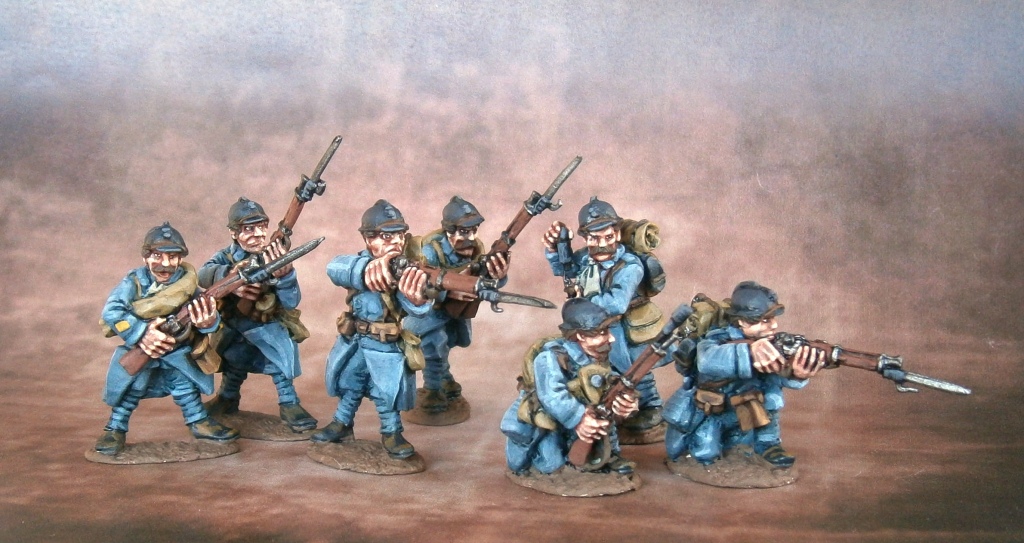 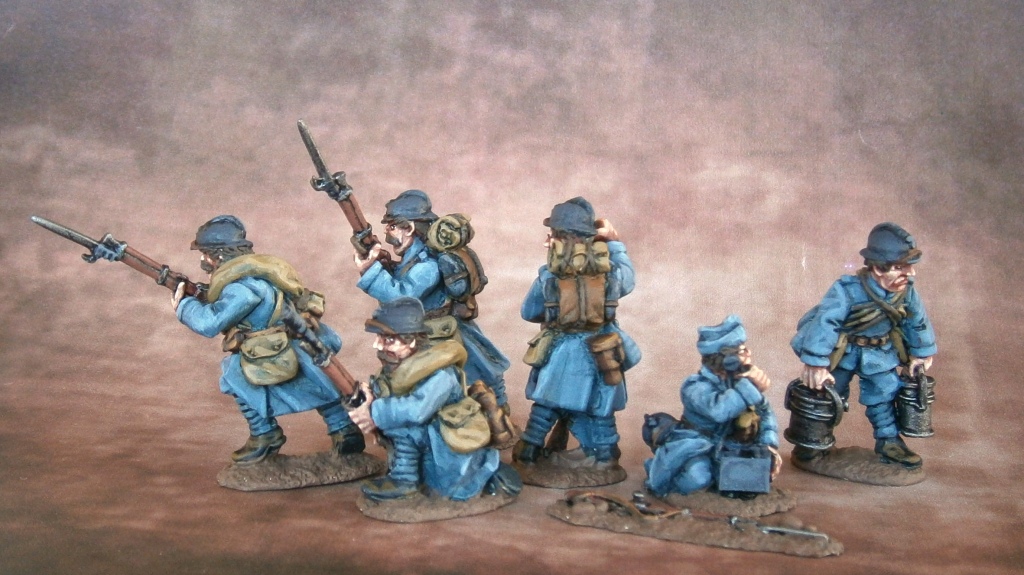 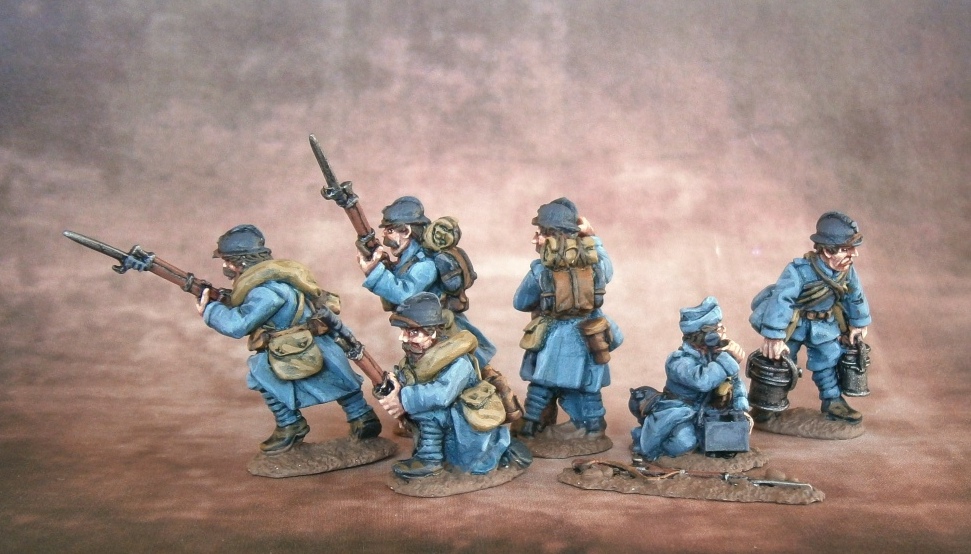 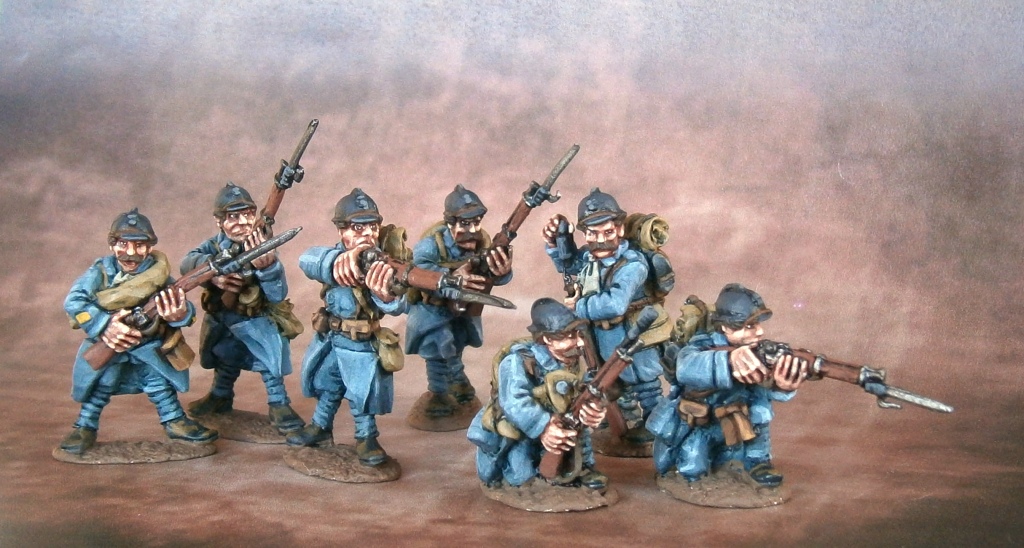 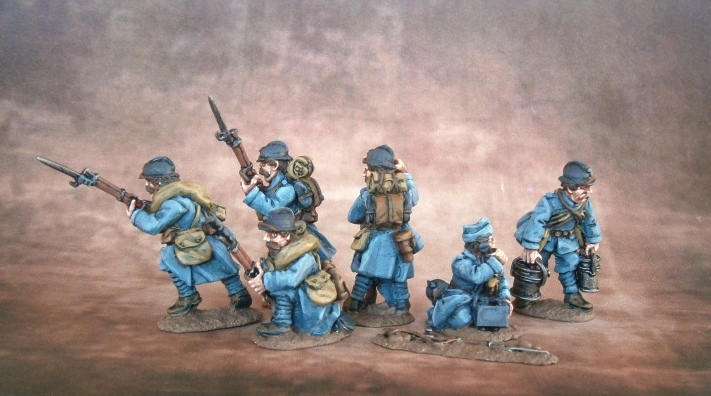 Stuff to give away

I have a bunch of 1/72 plastic figures (unpainted mostly) that I would like to give away to a good home/homes, I only ask that you pay the postage. It includes, HaT British Colonials in pith helmets, Sudanese infantry & camel riders, HaT Seven Years War Prussians (Action, March & Command boxes) - leave a message in comments if you are interested or want to know more.

Some work in progress shots of Wargames Foundry 28mm Fallschirmjagers - to oppose the Dad's Army figures I painted a few weeks back. They have been painted in the early war smock.

There will be more of these poses to follow plus officers, heavy weapons, & a few more Home Guard.
Posted by Jacksarge Painting at Tuesday, April 05, 2016 13 comments:

All 20mm metals today, fully painted & based by me. I think the majority (if not all) are metal miniatures from Elhiem. I was able to use several different types of camo patterns on this lot, see if you can spot 'em ;-) 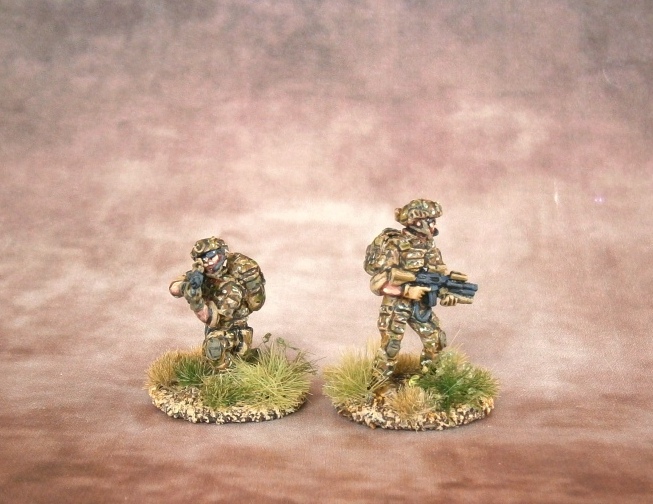 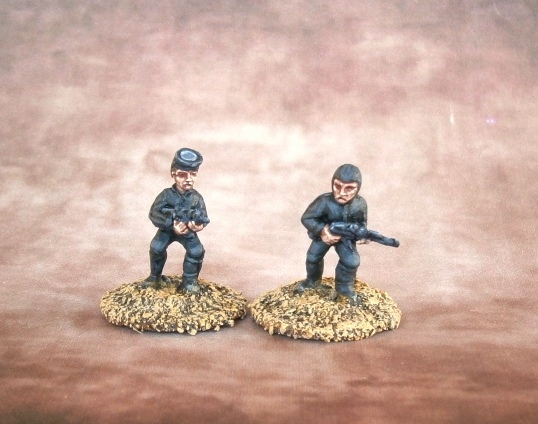 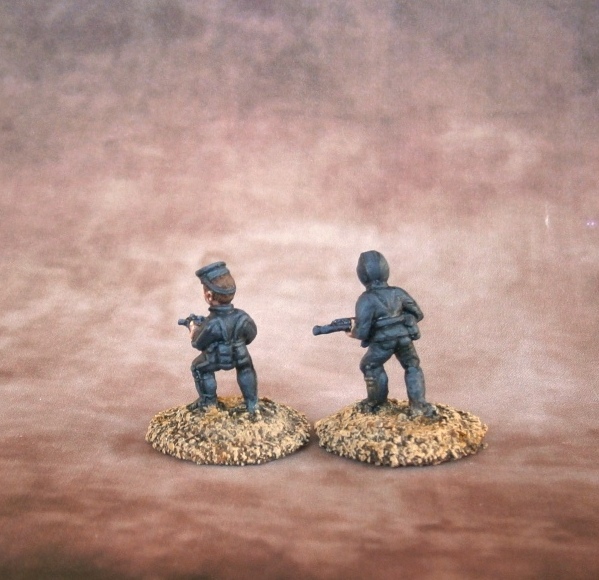 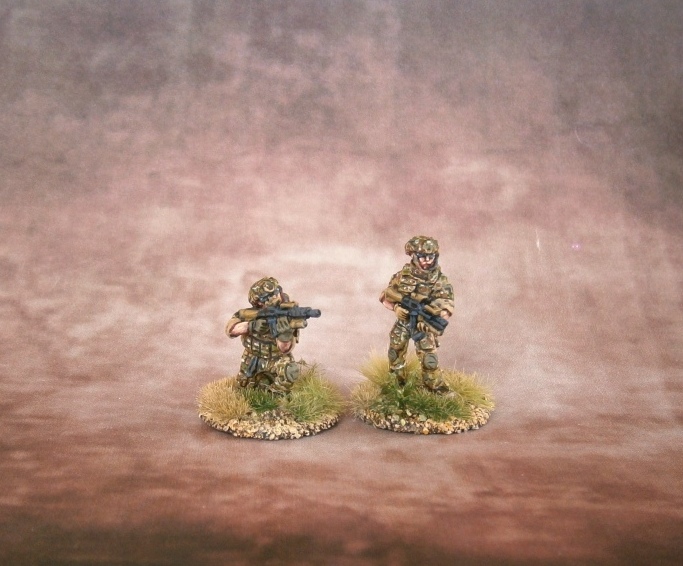 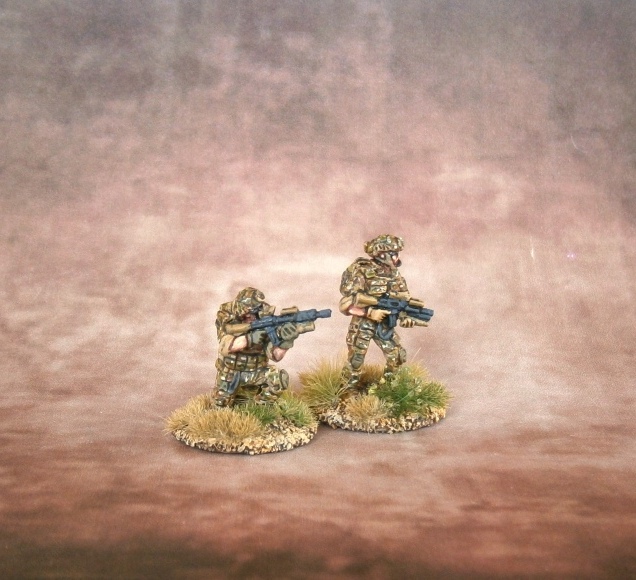 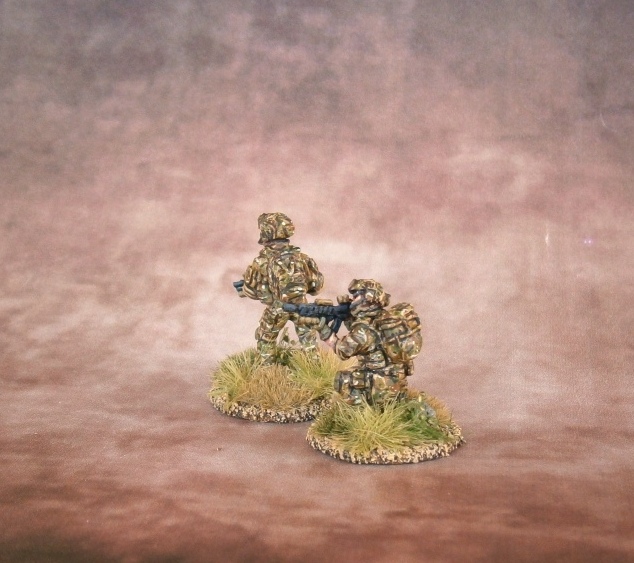 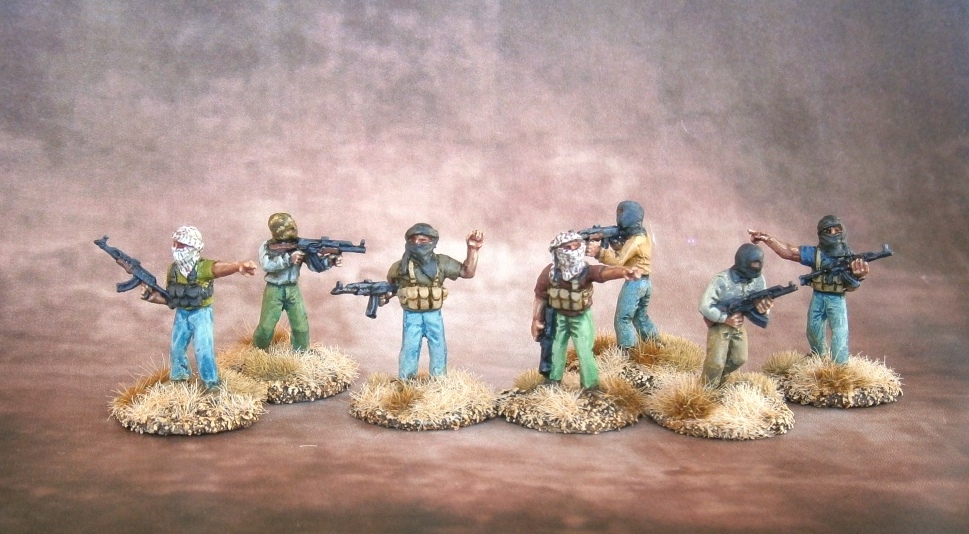 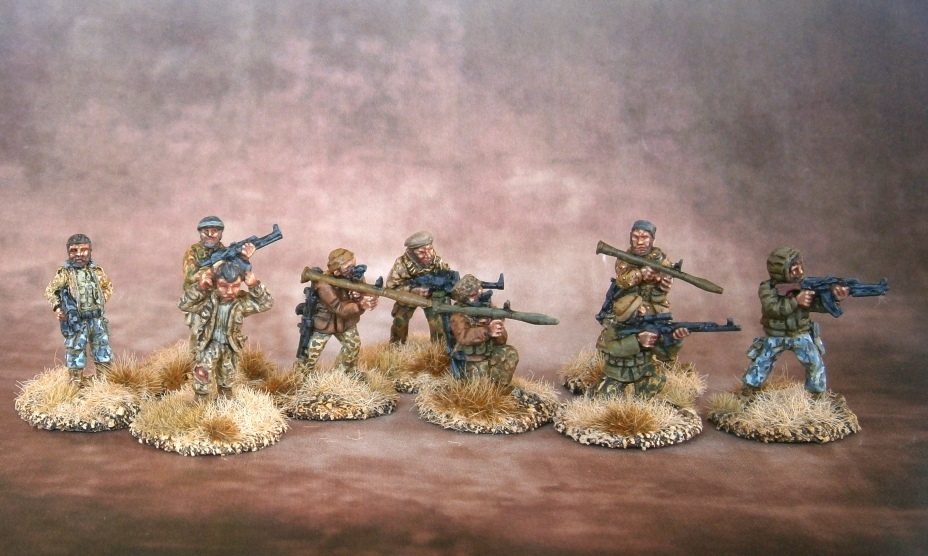 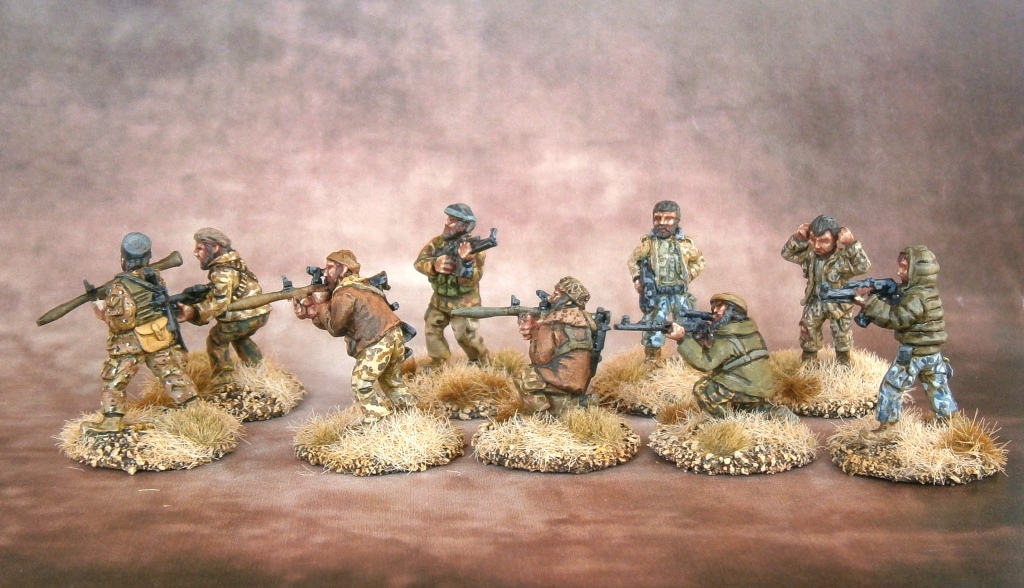 For those who recall the Foundry Dad's Army figures I painted, I will soon be posting some WIP pictures of the Foundry Fallschirmjagers. The FJ's will be in Early War equipment, in keeping with the Early War threat of invasion that the Home Guard may have to deal with.
Posted by Jacksarge Painting at Saturday, April 02, 2016 7 comments: