Back again with the second part of my thoughts about figure painting. Like I said in part one, treat it like a picnic table with an assortment of stuff on it- please take what you would like and leave what doesn't gel with you. Enjoy. :)

In the first part of the tutorial I put on the base layer for the skin and the wash layer- face & hands- now I'll talk about what I do next with that.
Here is the combination of paints I use in the process of painting human skin: 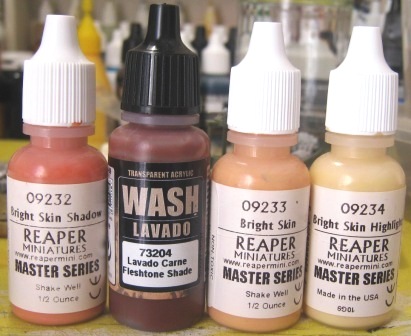 I picked the Reaper Master Series Bright Skin triad last year in Melbourne & have been really happy with how it has performed. It gives a bright appearance like the name suggests, which I think is ideal for getting a decent contrast for these little figures. The order you see in the picture is the order in which I apply them.
After applying the wash layer & allowing it to dry, I work back over with Bright Skin using a fine brush, making sure I leave remnants of the darker colours in creases & recesses. After this layer dries I do a final highlight with Bright Skin Highlight. Using a very fine brush I apply highlights to tip of the nose, upper part of cheek bones, sometimes to the forehead if the figure doesn't have a hat, knuckles of the hand & on upper surfaces of the outer parts of the hand. Here are a series of pictures to help illustrate my descriptions: 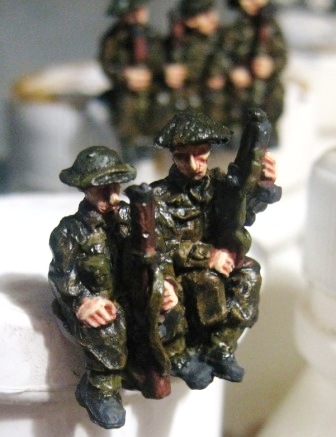 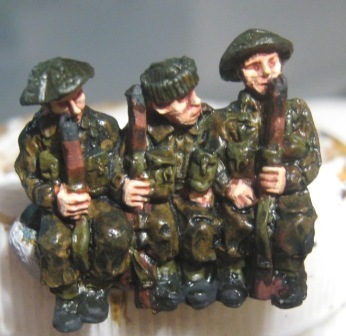 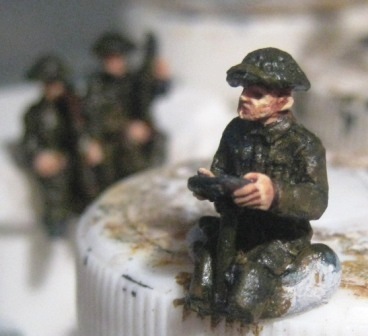 Happy to answer your questions and comments. :)


Like most people in this hobby my painting style has been influenced by others and has gradually developed over time, trial, & error. By sharing some of my painting steps with you I am not saying that they are superior to yours, they are just what I find works for me. Please feel free to take and leave whatever you like. :)

The first thing for me is the primer (unless you count the washing of some plastic figures, or the cutting back of flash, or the filing down of excess metal). I know that a lot of people use black, and I understand the reasons behind this, I too have used black as a primer in the past- especially when painting for other people & wanting to get stuff churned out in good time. Now, however, I use Grey as my primer shade of choice, and am currently using artist's acrylic gesso for this. The gesso gives a good protective coating to the figure, shrinking nicely & sealing the figure, and also giving a good "tooth" to apply paint to. I have found it to be excellent for both metal, "bendy" plastics and hard plastics.
I believe grey to be a great neutral for miniatures. Personally I think black can dull colours down and white can make them brighter than they need to be. My views on this were influenced some years ago by a master miniature painter Joe Videki and his wondrous website loaded with useful links & pictures of his own work- check it out HERE .
So grey acrylic gesso is my starting point:

My next step is to simply block the figures in with the main colours, usually the darkest shades. In the case of the British figures seen above I "blocked in " with the following colours from Vallejo:


In this process I do the flesh first, using Reaper Master Series "Bright Skin Shadow" as my base colour.
I haven't recorded what colours I used for the Anglo-Saxon figure.
Here they are all "blocked in": 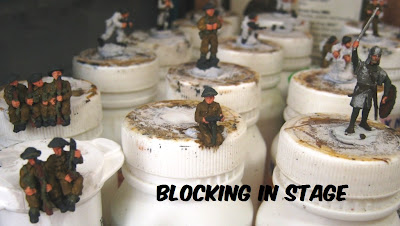 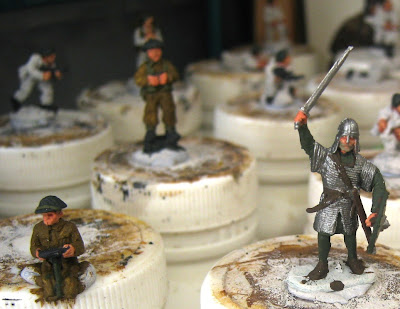 This next stage isn't something I picked up from reading Joe Videki, although some of the colour theory has been an influence.
I think washes are a great boon to the wargamer, and different people use them in different ways. Some people prefer to apply an overall wash of a murky brown to all their figures at the end, others just apply a subtle wash to flesh areas and still others use a wash that is a darker shade of their main colours.
My idea, influenced by colour theory picked up from Videki & glazing ideas used in fine art training, is to try and use complementary colours for shading. For an intro on complementary colours you could start by looking HERE . In it's most basic form the complementary of red is green; orange is blue; purple is yellow etc..
Now I don't have this down as a fine science, I just do what looks about right, so, for example, when I used to paint the redcoats of British Napoleonic era troops I would use something like an olive drab for my shading stage- a kind of green as the complementary for a brickish red.
For my British WW2 battledress I have settled on a dark, murky blue as a wash- I used to water down Payne's Grey acrylic paint, but now use pre-made washes for this. For the British webbing, packs and helmets I apply a brown wash- they are base coated in a green shade & so get a brown which has something of red in it.
It is worth noting that shadows are not actually black, however because the figures are tiny we still need to have visible differences between areas of light & shade. The washes are reasonably dark which helps provide contrast- contrast is really important when it comes to small scale items. If we were viewing a real person from a distance, the colours would be lighter too.
I must admit I haven't tried washing flesh with a greenyblue yet- may try that as an experiment some time. For flesh I use a fairly normal flesh wash from Vallejo:

For metallic surfaces like weapons or chain-mail I use an armour wash after base coating in something like Oily Steel from Vallejo:


Here's the washes that I currently use for the British Battledress:

And the washes for the webbing, pack & helmet:


Remember that the wash stage is not the last stage in my painting method, there is a whole lot more to be done.
With this stage done, here's what the figures now look like with the washes freshly applied: 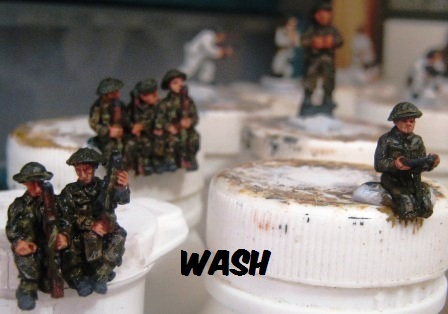 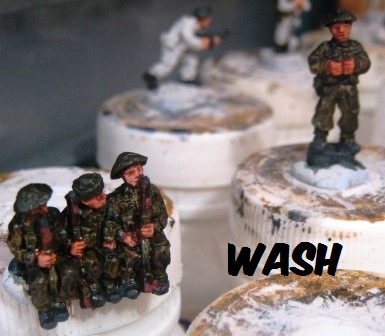 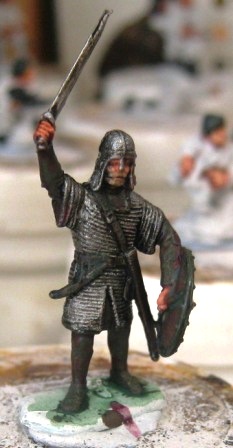 That is all for the moment. A second part will follow soon - stay tuned.....

I forgot to add to my WIP last week that I also have an Italeri British 25pdr with Quad tow under construction- have finished most of the Quad & am working on the gun. This week I have made quite a bit of progress on the Scalescenes farmhouse that I am building.
Posted by Jacksarge Painting at Saturday, August 18, 2012 3 comments:

What's On the Workbench? WIP

I am working towards putting a bit of a tutorial together about how I paint my figures, but for the moment I will give you a glimpse of what's on my workbench for August.

Above you can see the Staghound waiting for its decals & final weathering; some  Commandos converted from Airfix British & mystery beret heads, in process of being painted; and a Ready to Roll Half-track loaded down with resin stowage from Black Dog- this has been undercoated in light grey. The Black Dog stuff was designed for an Academy kit I think, so some filing and cutting had to be done to achieve a fit. 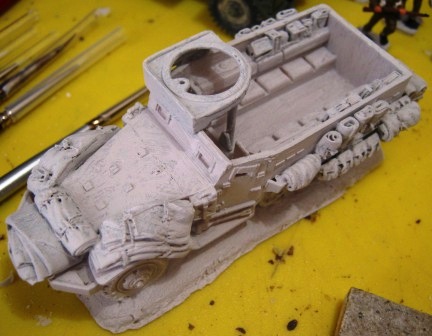 Another shot of the Half-track undercoated. The stowage really lifts this model I think. I will also be adding some crew/passengers and a machine gun to the ring arrangement. The figures will be from Kelly's Heroes and AB. 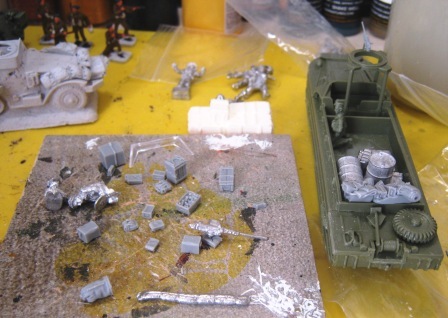 Above is an Airfix DUKW which will be receiving more of the Black Dog stowage plus some bits from Sgts Mess. The plan is to make some sandbags to go on the bonnet/front, out of either Milliput or Greenstuff. I have already changed the ring mounted machine gun for a spare from a Dragon Sherman kit- has lots more detail. The vehicle will be crewed by AB figures along with some possible passengers from HaT squeezed in next to the equipment in the back.
From my reading of "Assault Crossing" by Ken Ford, I know that the Wessex boys made use of DUKWs for transport on their way to the Seine. 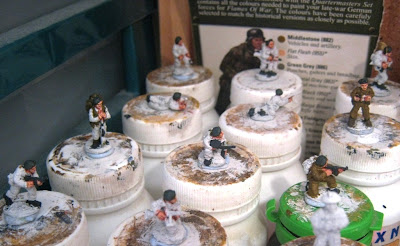 Click on the above picture if you want a larger picture. These are some more Battlefield Commandos which are waiting for more paint- lots to do here.

In addition to these things I have also started putting together a farmhouse from Scalescenes, which is taking some doing- lots of bits to cut out and glue.

Welcome to the blog's newest follower, Michael from Model Command blog , it's a new blog, but he already has some classic WW2 goodness posted- check it out if you get a chance.
Posted by Jacksarge Painting at Wednesday, August 15, 2012 17 comments:

I have finished three Churchills now, two from Italeri (ex Esci) & one from Blitzkrieg Miniatures & thought you might like to see them. The markings are all hand painted to represent 31st Tank Brigade, 9th Battalion RTR- not sure if the names on the sides are accurate, but they'll do. I think they appeared in my last AAR, but here they are lined up to have their picture taken: 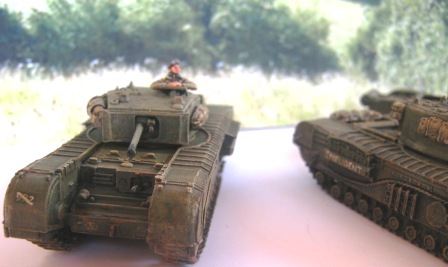 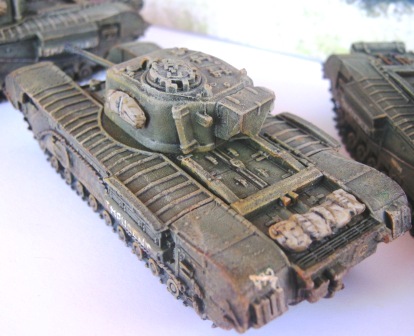 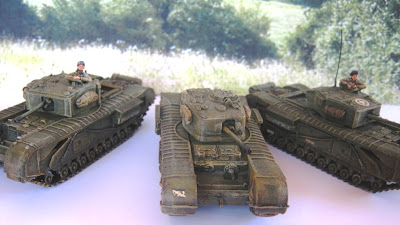 At some stage I would like to add a Churchill Crocodile flamethrower tank to this lot. I'm pretty sure that the 31st Brigade acted in support of the 43rd Wessex at Hill 112 & surrounds.

It's taken me quite a while to actually finish this section of British, it was hanging around on my workbench for weeks. This is a composite section in terms of being metals and plastics. The metal figures come mostly from AB with one Wartime Miniatures figure, and the plastics are conversions plus a flamethrower bloke from Caesar Miniatures. For the converted plastics I chopped up and combined figures from Airfix and Italeri to get another bloke sweeping for mines & another detonating a charge. Well, here they are, I hope you like them: 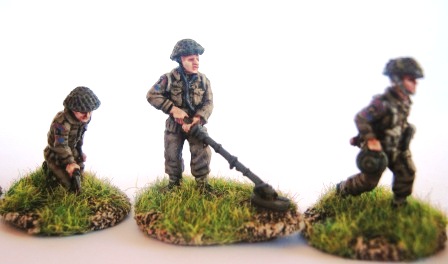 Thought you might like to see where I am up to with the Staghound that I received from Blitzkrieg Miniatures . I have done most of the paintwork but am waiting for some decals from Dom's Decals before I complete the weathering side of things.
I don't think 8th AB or 43rd Wessex had any of these, but I'm sure they would have encountered them in some of their operations, so I will just put on generic decals rather than unit specific ones. I have added some stowage, which I think was from Sgts Mess, & a metal mg. The tyres/wheels have had weathering pigment added to them- European Dust from MiG. 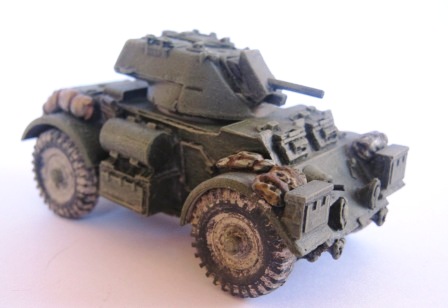 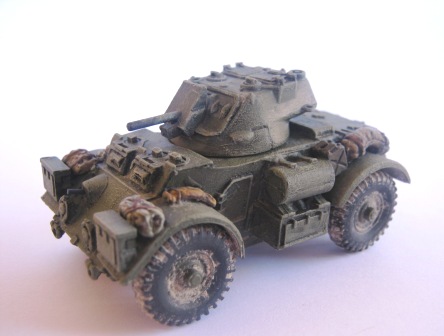 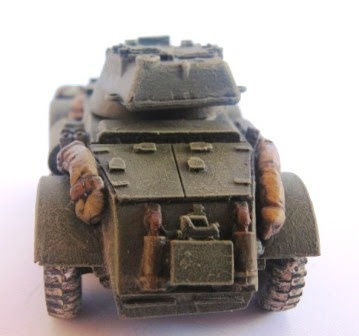 G'day, I have finally finished basing up the British Commandos that Dan Dunbar sent me as part of a prize I won from a competition run on his blog. Thanks Dan you are a top bloke- I am also looking forward to a Centaur tank conversion that Dan is finishing for me.
I have attempted to base up the Dan section in the same style as mine & have taken photos of them as a separate group as well as mixed in with my existing Commandos. Dan's Commandos are all plastic figures using a variety of manufacturers including PSC, Italeri & Revell- as well as some great greenstuff berets. Enjoy the pictures, & thanks again Dan :) 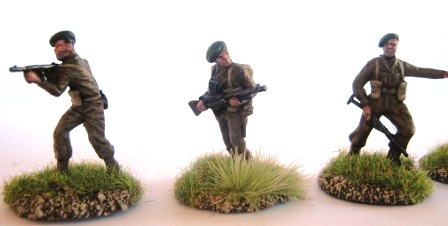 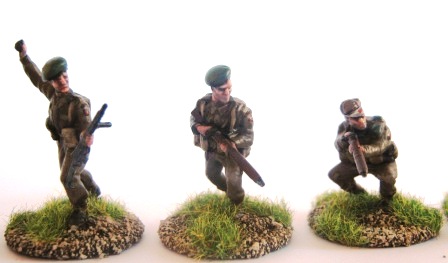 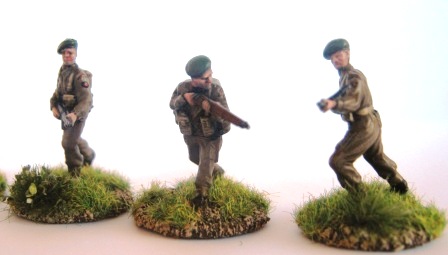 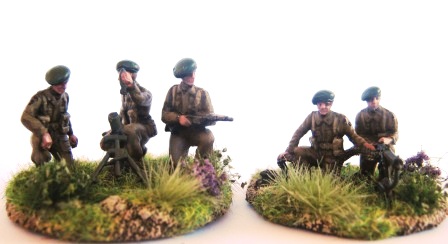 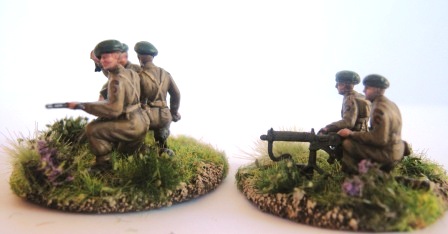 Now, mixed group shots of Dan's Commandos & the ones I finished a couple of weeks ago:
﻿ 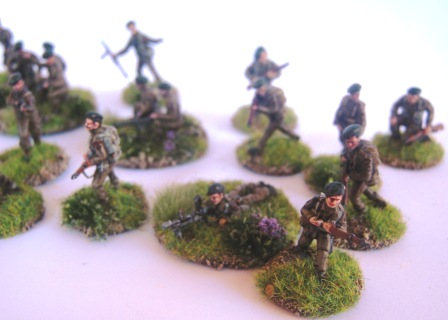 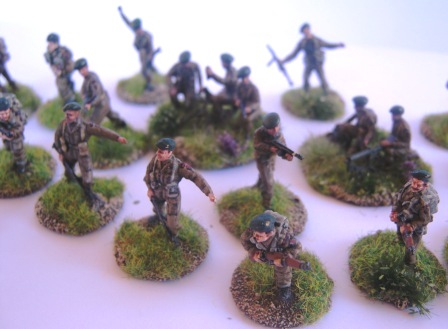 Could have taken some extra group shots & mixed it up a bit more, but was keen to get these up on the blog. None of these miniatures have had any varnish as yet, eventually I will hit them with some Testors Dullcoat.
I am currently working on some more Battlefield/Blitz Commandos plus some more plastic conversions (head swaps basically).
More posts to come soon, I have pictures of my first section of British Combat Engineers (finally finished); WIP shots of my Blitzkreig Miniatures Staghound A/C; & pictures of my finished squadron of Churchill tanks. Stay tuned.