In between painting a lot of modern 28mm I have also managed some medieval stuff.
Today I can show you three 28mm mounted heralds from Curteys Miniatures - I'm quite pleased with how these turned out. I was hoping to show you the first of my Anglo-Saxons for Lion Rampant, (perhaps I'll call it Wyvern Rampant for the Anglo-Saxon Kingdom of Wessex), but the photos I took were out of focus - I'll try again later.

Here are the happy heralds doing their thing at the tournament: 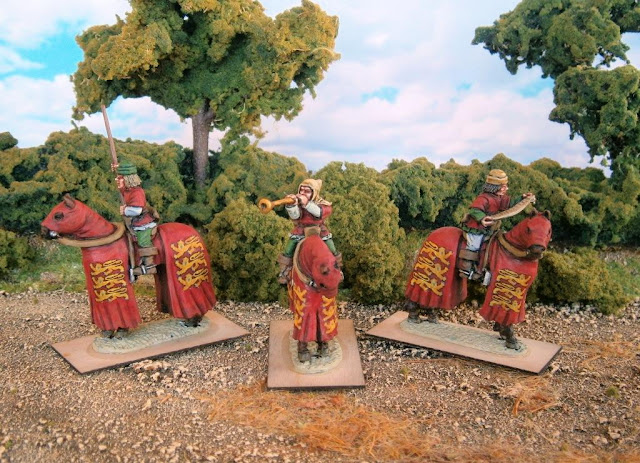 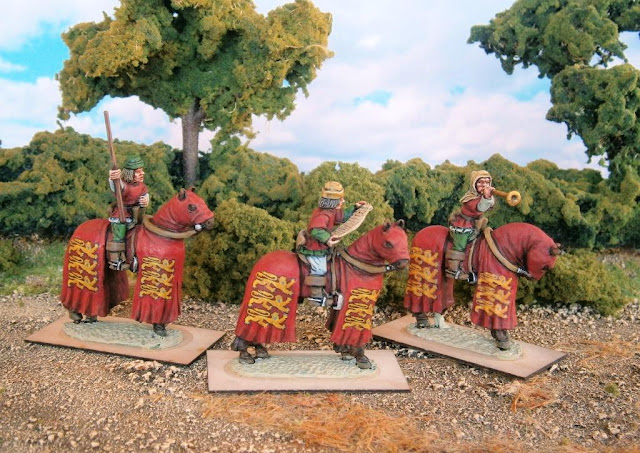 The bases are unfinished as the chap I painted them for likes to do his own basing.
Posted by Jacksarge Painting at Monday, June 29, 2015 10 comments:

Painted these recently- 28mm Naffatun from Footsore miniatures , part of their Armies of the Caliphates range. 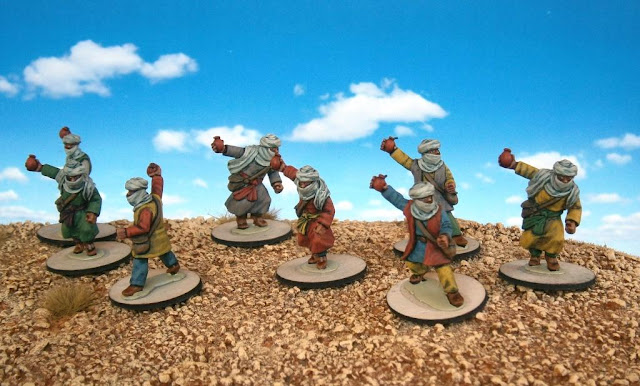 More 28mm Moderns as part of a commission. My customer asked me to paint them as British in desert cam to fit in with his existing collection. Some of you may notice that not all the sculpts were originally of Brits,  & there's a mix of figures from Empress and Eureka I believe. Bases are left unfinished as my customer likes to do his own basing.
I quite enjoyed painting the chaps in the bomb disposal suits - something different.
I'm pleased with how these turned out, there's actually more work in these than first appearances might convey. There is a lot of detail on these sculpts, so I went back and "lined in" a lot of areas using the extremely useful Reaper Master Series Brown Liner paint. 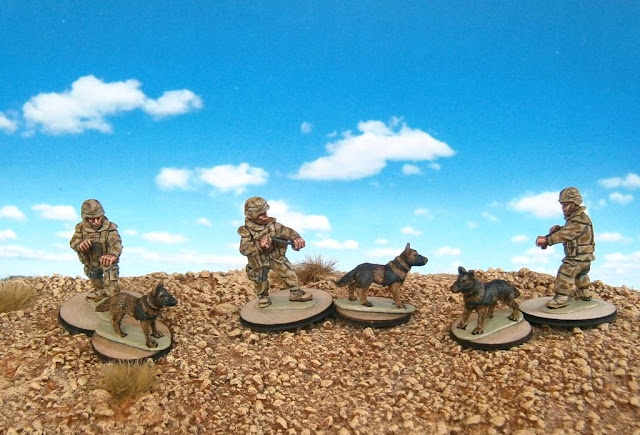 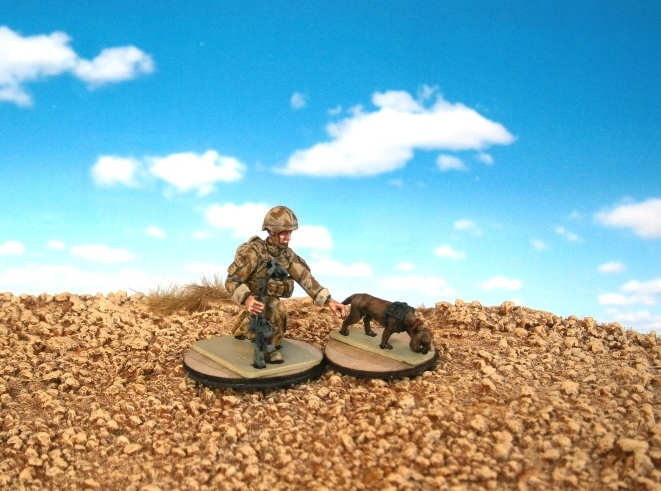 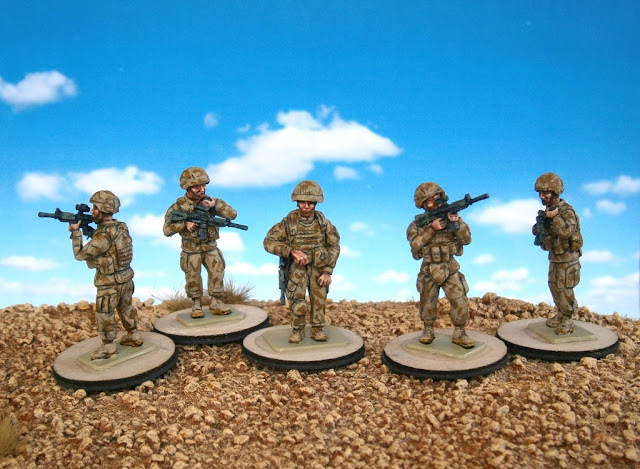 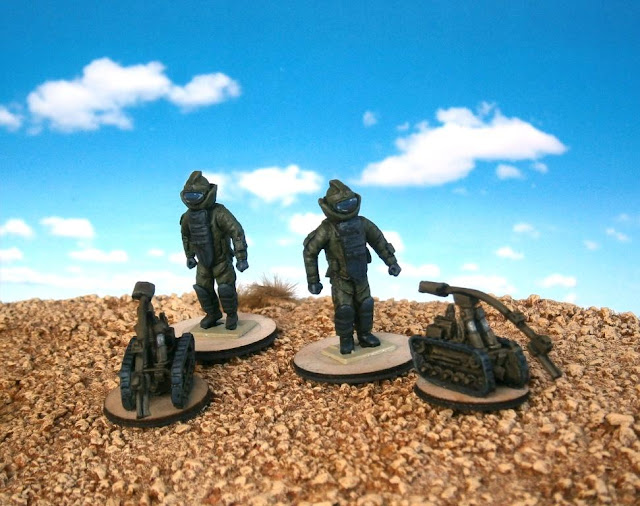 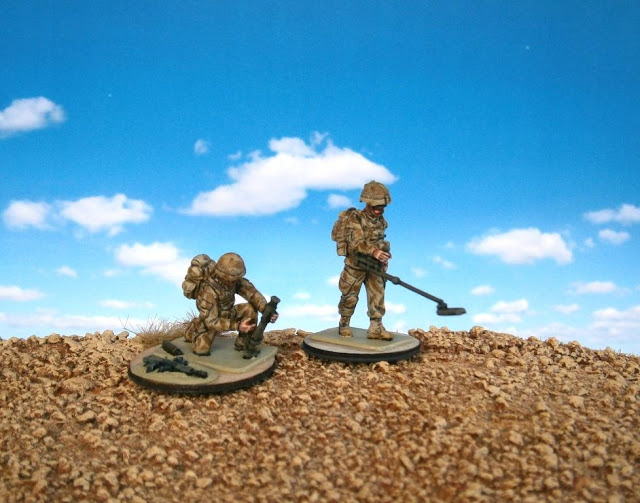 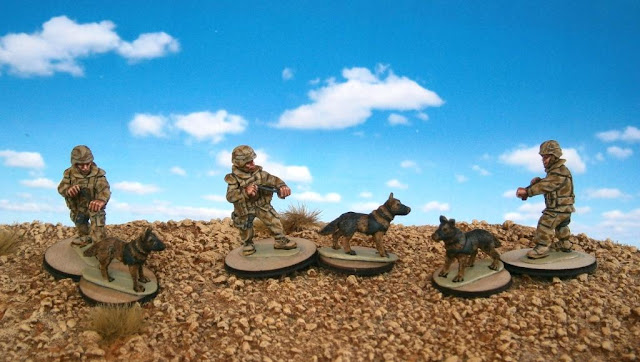 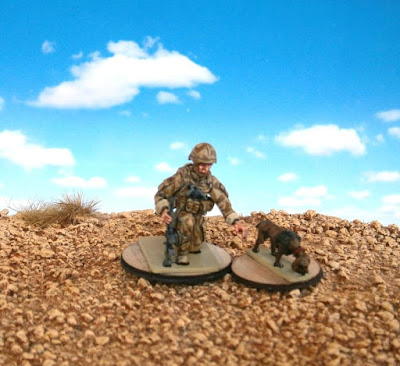 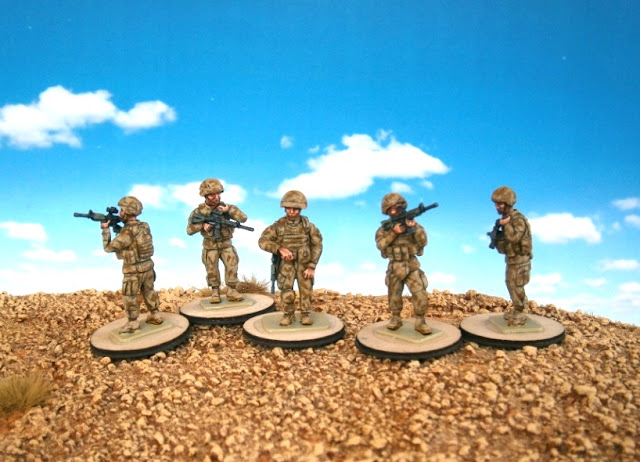 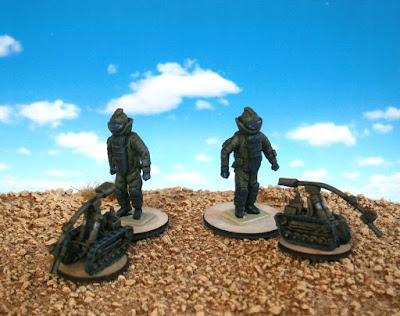 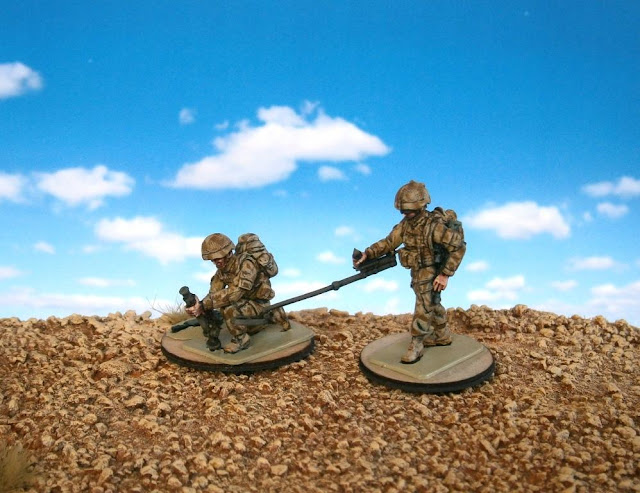 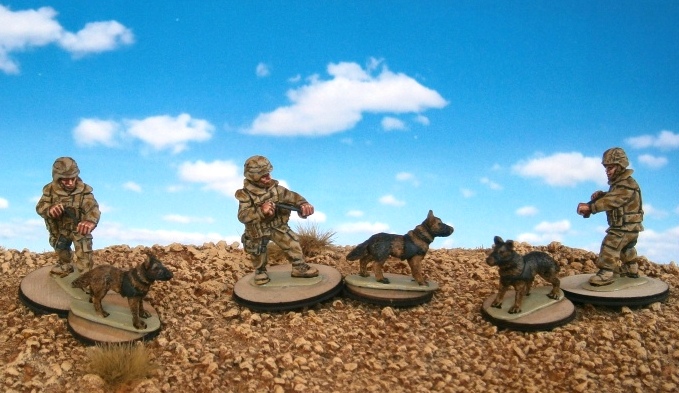 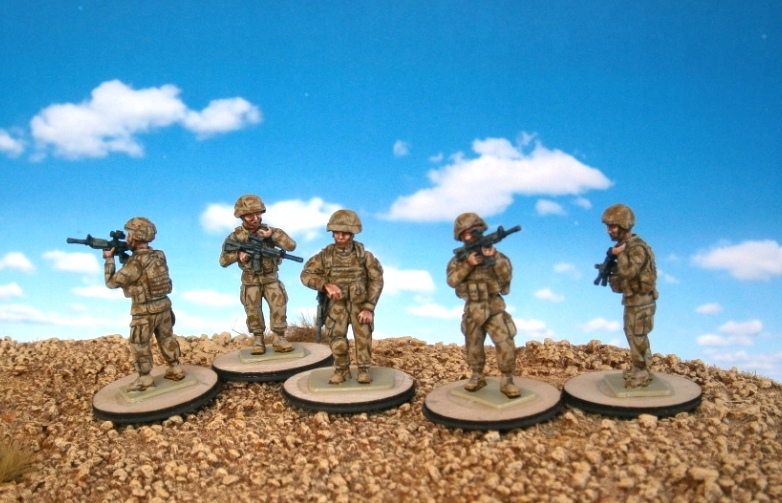 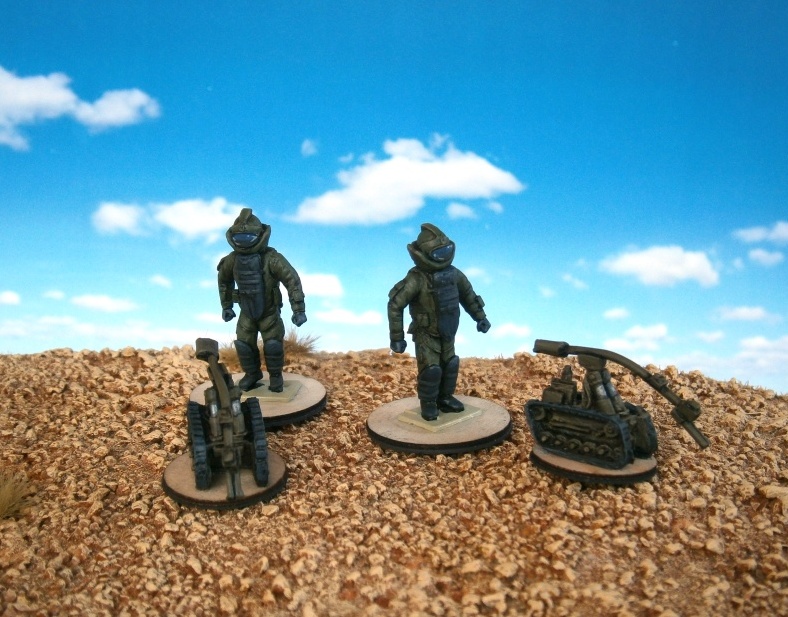 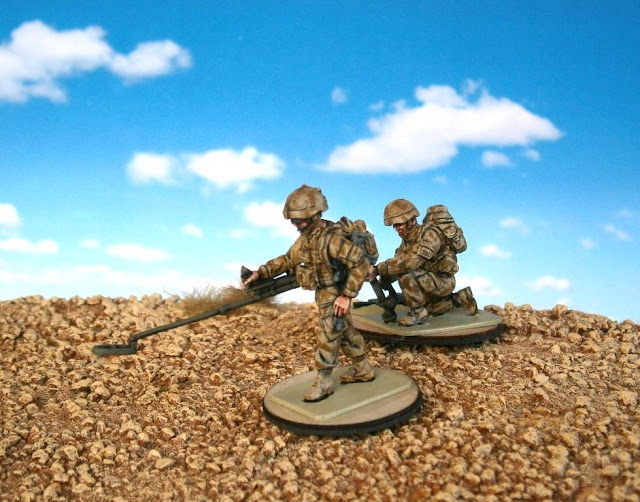 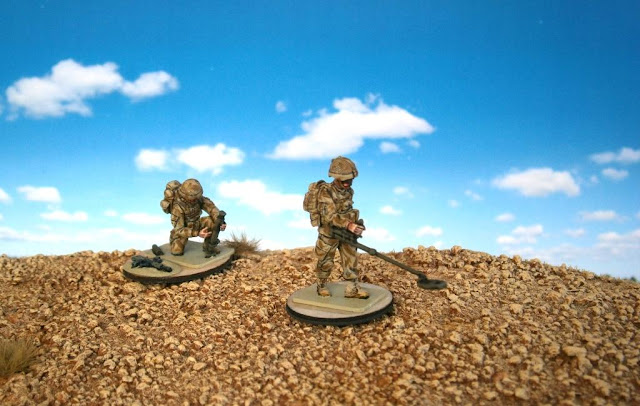 G'day all, today I have some figures that I painted for myself....then I traded them :-)
Actually, I had already received these figures from a previous trade, when I think of it the trade has several "generations". First I had some 6mm War of Spanish Succession English which I traded for a 15mm Viking Army, later I traded the Vikings for some 28mm Age of Arthur figures, which I have been painting and trading for 28mm Gripping Beast Anglo-Saxons - I hope you follow?

Anyway, today's pictures are of some 28mm Wargames Foundry Late Imperial Roman/Age of Arthur, Archers which have since been traded for more Anglo-Saxons (see my last post for more on the Anglo-Saxon project). 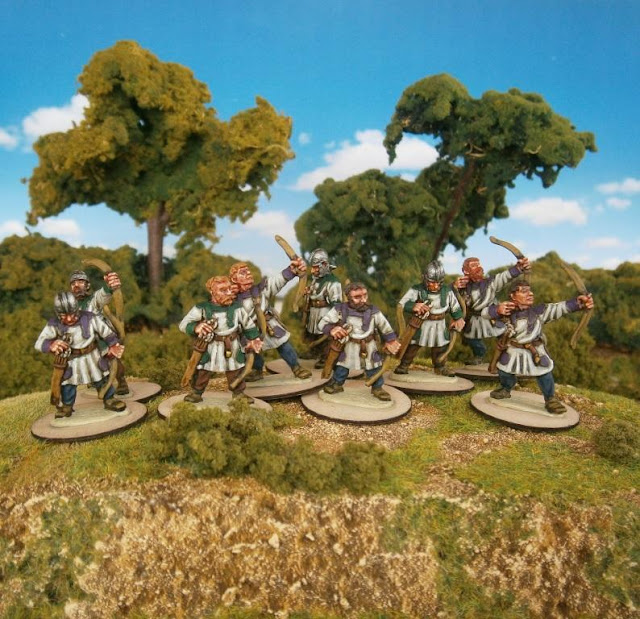 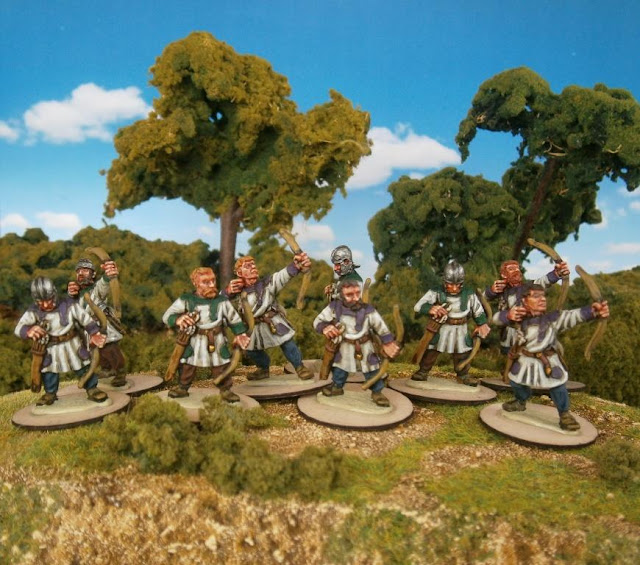 OK, first up, some First World War French infantry - 28mm from Scarab Miniatures.
These are part of a large WWI French commission that I will be tackling over time. 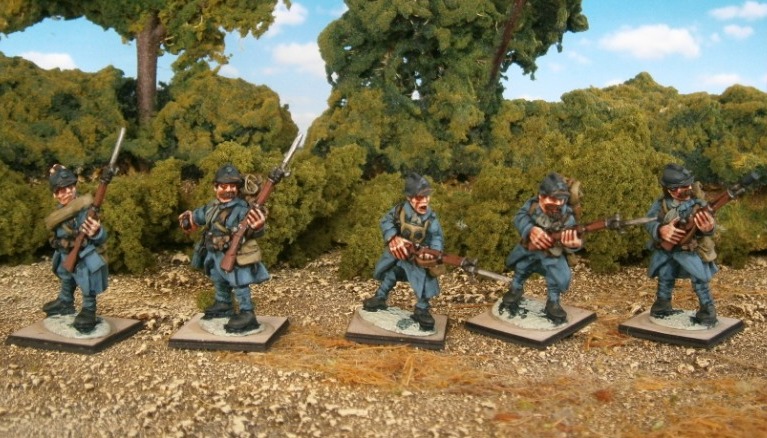 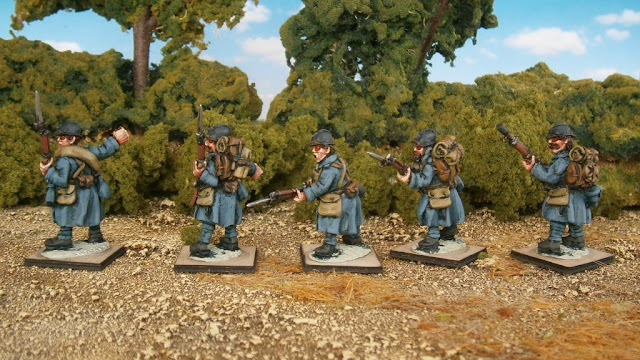 These figures were fun to paint, nice chunky sculpts with plenty of raised detail. I'm quite happy with how the "Horizon Blue" of the French uniforms turned out.

On an altogether different topic, I managed to acquire a copy of the Lion Rampant rules set by Dan Mersey, published by Osprey. I also picked up a copy of Wargames Illustrated which has an Article by Mr Mersey on adapting these rules for the "Dark Ages", with some example army lists etc.
Over the weekend my son and I played our first game of Lion Rampant using his collection of Lord of the Rings figures, supplemented with a few figures from my own collection. We had great fun, with plenty of laughs and unexpected twists and turns - I was particularly surprised when the leader of my mangled warband managed to defeat his leader in single combat. I can recommend this rule set for fast play, fun packed games, that don't require huge numbers of figures and can be played in lots of different scales. I'm pretty woeful at remembering and learning rules mechanics, but I managed to get my head around these quite well - assisted by a couple of useful play-throughs  I found on YouTube:
HERE & HERE

So, my new project? Well, I have started painting up some 28mm Anglo-Saxons from Gripping Beast, with an eye to play Lion Rampant and other skirmish style or small battle games with them. I was fortunate to obtain a bunch of brand new GB metal figures through a trade with a fellow Tasmanian wargamer - even got some of those tasty Little Big Men Studios shield decals.
I will be basing the figures singly - I prefer that to element based stuff for this period - which will mean that I could also use them for the Saga rules system.
I have had a long standing interest in the "Dark Ages", and already have a few books related to the period. The Anglo-Saxons will give me an opportunity to play not only against Vikings, but against other Anglo-Saxons, Welsh, Picts/Scots & probably Irish raiders. I have long been impressed by the character of Alfred the Great, and aim to have a force that is nominally from that period.
Another cool thing about collecting the Anglo-Saxons is that they mix in quite well for Middle Earth style warfare too.

Here is the second instalment of Masai, first part can be found here.
This bunch are all warriors, and mighty ferocious they look too!
These are 28mm miniatures from Wargames Foundry -painted as part of a commission. 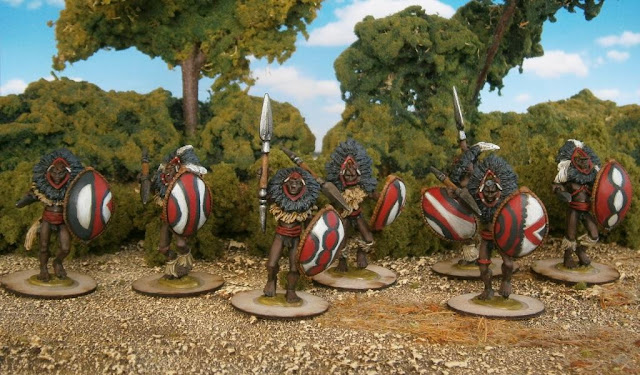 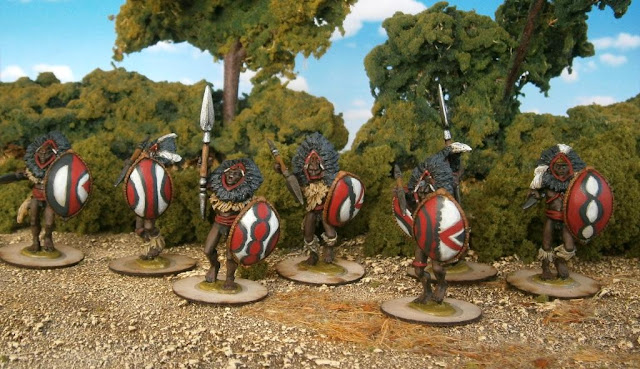 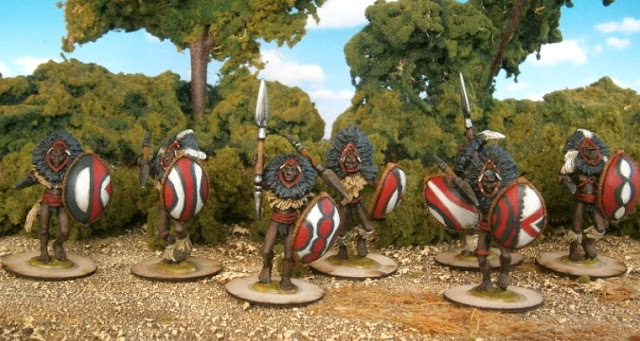 I have updated the information on my Painting Service page -HERE
Please get in touch if you want something painted, my rates are very reasonable, and you will be helping me to pay some bills :-)